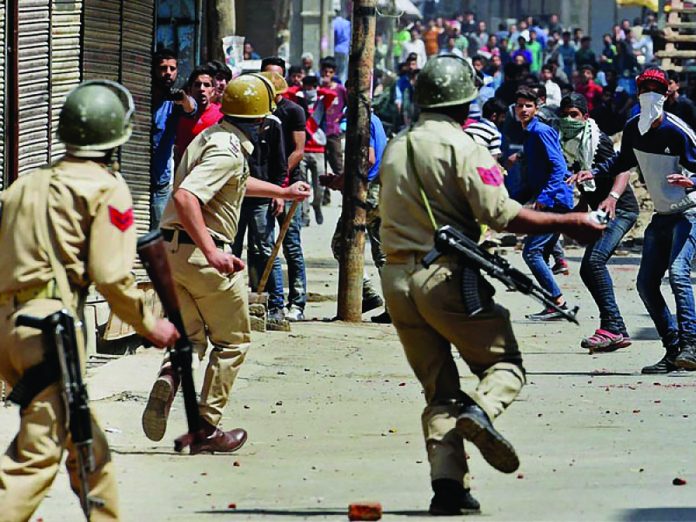 August 15 marked India’s Independence from Britain. However, Indian independence is in direct contrast to Kashmiri independence. In 1949, a five-member United Nations commission passed Resolution 47, which called for a referendum on Kashmir and laid the groundwork for a plebiscite to steer Kashmir toward self-determination.
However today, 67 years later, Kashmir continues to be ruled by India, an unwanted and oppressive force. Kashmiris are a people committed to self-determination and freedom. They continue to fight against Indian rule. The Indian Independence Day celebrations were marred by non-stop protests and fighting in the Kashmir’s capital city of Srinagar, a place where the people see no cause to celebrate.
Those marching in protest have consistently been victims of India’s Central Reserve Paramilitary Force (CRPF), who are viewed as foreign criminals administering brutal crackdowns in majority Muslim Kashmir. After a deadly 51 days, the curfew instituted by the Indian government on July 9 was finally lifted; but not before at least 69 people were killed and hundreds injured. The CRFP employed the controversial use of pellet guns, which caused multiple deaths and over 100 individuals to lose their eyesight.
Although India, a Hindu majority nation, claims Kashmir as an Indian state, Kashmiris unswervingly and publicly disavow this claim. They have also aligned their nation with Pakistan, whom they consider integral to Kashmir history and existence.
For over half a century, India’s disregard of UN Resolution 47 has steeped Kashmir into continuous unrest. According to the Times of India, Pakistan delivered a letter to the Indian High Commissioner issuing a formal invitation to hold talks on the situation in Kashmir. India declined the invitation stating, “There can be no dialogue amid provocations”.
Just recently Prime Minister Nawaz Sharif nominated 22 parliamentarians as special envoys to bring international attention and inform the world about the Indian brutalities in held Kashmir, according to The Dawn newspaper.
India’s denial of reality regarding Kashmir is quite evident in daily news coverage of the active opposition of Kashmiri citizens against Indian rule. Kashmir is a place oppressed and controlled by India against the will of the people. Those brave enough to come outside to protest the illegal presence of Indian troops are viciously attacked and shot with pellet rifles. Kashmiri youth are being tortured and blinded. Their quest for freedom is met with violence, beatings and death, while the world community still looks on in silence.
The Imam of the Muslims of America, Inc. (TMOA) and Vice Chancellor of the International Qur’anic Open University, His Eminence El Sheikh Syed Mubarik Ali Gillani whose entire family are from Kashmir calls upon Secretary General of the United Nations, Ban Ki Moon to address the atrocities taking place in Kashmir. El Sheikh Gillani issued the following statement:
“We condemn the brutal torture and killing of innocent Muslims suffering in this unceasing genocide committed by Indian troops. This includes Kashmiri women and children who are being killed and those who are dying from starvation. India continues to send more and more troops to torment the people of Kashmir while the United Nation turns a blind eye to the brutal situation. We demand that the UN Secretary General immediately take steps honor the 1948 plebiscite.”
Since 1988, the members of The Muslims of America and Banaatun Noor International (BNI), affiliates of the Islamic Post, have stood in support of the Kashmiri right of choice. Members of BNI, in the early 1990s, visited the refugee camps in Azad (Free) Kashmir where they distributed aid and listened to the horror stories of gang rapes, murders and other brutalities being perpetrated against Kashmiri people by India’s armed forces. The refugees also pleaded with the BNI delegation to carry their stories back to America and the world, which they have done now for over two decades. Kashmiris declare they will have freedom or die trying to achieve it.