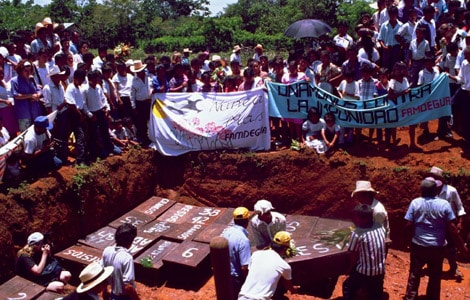 (IP) The Academy of Motion Picture Arts and Sciences voted Silence of the Lambs Best Picture, Best Actor, Best Actress, Best Director and Best Writing , the US Library of Congress  considered  the movie "culturally, historically or aesthetically" significant – a movie centered around an incarcerated cannibalistic serial killer. The prestigious 16-member George Foster Peabody Board selected an episode of the radio program This American Life, distributed by Public Radio International  entitled “What Happened at Dos Erres” as one of the winners of its 2012 annual award for excellence. The programming, graphically documented, camouflaged or as Keane Bhatt of the North American Congress on Latin America put it ‘sanitized history’, makes no mention of  the US role in the crimes against humanity in Guatemala.  Towards the end of the segment, the host makes mention that the US government knew about the killings and did nothing to stop the genocide.

What happened at Dos Erres –  the massacre of 200 people on 6 December 1982, in the small village of Dos Erres, in the municipality of La Libertad, in the northern Petén department of Guatemala, was destroyed. The details of the atrocities are too gruesome to print. The Dos Erres massacre took place during the US-backed de facto presidency of Rios Montt.  His forces killed tens of thousands of Guatemalans, mostly Mayans, in the year 1982 alone, with the physical and financial backing of the US government.

The Historical Clarification Commission (Spanish: Comisión para el Esclarecimiento Histórico, or CEH), also referred to as International Truth Commission, was Guatemala's truth and reconciliation commission established in 1994 as part of the U.N. sponsored peace process. Then President Clinton declassified documents that lent to some of the findings of the Commission. Its final report, titled Guatemala: Memory of Silence, was published in February 1999. The report identified a total of 42,275 named victims; of these, 23,671 were victims of arbitrary executions, and 6,159 were victims of forced disappearances. It found that Maya Native Americans accounted for 83% of the victims, and that 93% of the atrocities committed during the conflict had been the work of the government's armed forces.

Report of the Commission for Historical Clarification found:

The government of the United States, through various agencies including the CIA, provided direct and indirect support for some state operations. The report contains criticism of some US corporations for supporting what the authors called "Guatemala's archaic and unjust economic structure. ”

The majority of human rights violations occurred with the knowledge or by order of the highest authorities of the state.

The United States demonstrated that it was willing to provide support for strong military regimes in its strategic backyard. In the case of Guatemala, military assistance was directed towards reinforcing the national intelligence apparatus and for training the officer corps in counterinsurgency techniques, key factors which had significant bearing on human rights violations during the armed confrontation.

The Washington Post, in 1999, mentions the government’s involvement in the following paragraph:

The PBS Newshour made mention of the report findings on their website.

The Last Colonial Massacre: Latin America in the Cold War, by Greg Grandin documents NSA and State Department documents detailing the clandestine strategy of the US to create an intelligence apparatus in Guatemala supporting the repressive government of Rios Montt in the genocide of Guatemala’s indigenous people.

Guatemala, what the US perceived as the extension of the Cold War battlefield,  prompted Edwin Martin, then Assistant Secretary of State for Inter-American Affairs in 1962, to write  “Jose Arevalo could be elected in a free election, and peaceful transition achieved. If this occurred, political power in Guatemala would be in the hands  of a man not only passionately and pathologically antagonistic to the United States…but a man who certainly paved the way for the accession of Communism into power in Guatemala…” .

The same year the US called for the establishment of “effective professional intelligence channels within the military forces” with the intensification of “intelligence security and training”. In 1955, the US had ten advisors and civil police training programs abroad, two in Asia and Guatemala.

Between the years of 1956 and 1961, over six hundred Guatemalan military were trained in the US or at Fort Click in the area of the Panama Canal.

By 1963 the US had begun the establishment of an effective counter-subversive intelligence apparatus in Guatemala.

CIA documents discovered at NSA in 1966 provide detailed information of intelligence information gathered from their interrogation, suggesting that CIA agents were possibly present at the Guatemalan government’s questioning.

In reference to the criminal trial of Montt this year, Kate Doyle, a Guatemala expert at the National Security Archive in Washington said, “Part of the burden of that historical responsibility was that the United States tried to use Guatemala as a bulwark against Communism,” Ms. Doyle further commented, “The U.S. played a very powerful and direct role in the life of this institution, the army that went on to commit genocide.” Burial of the remains of the villagers of Dos Erres.