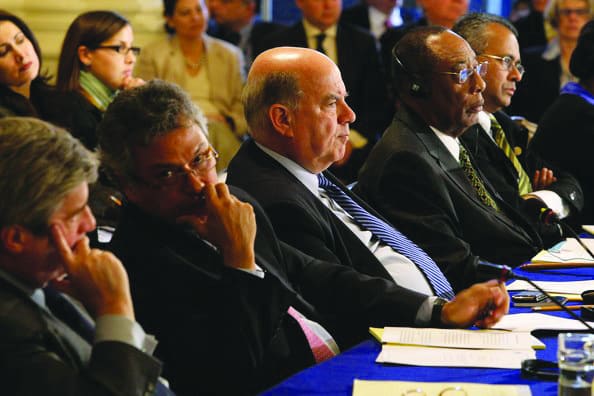 (IP) Motivated by the downing of Bolivian President Evo Morales’ plane over the Snowden fiasco, the Permanent Council of the Organization of American States (OAS), made up of the representatives of the 34 active member countries of the OAS, approved a resolution expressing solidarity condemning violations of international law and the inviolability of heads of state, thus condemning the actions of the European countries involved. An emergency meeting of The Union of South American Nations (UNASUR) in July denounced “the flagrant violation of international treaties” along with The Community of Latin American and Caribbean States (CELAC) — "We express our rejection of these facts unjustifiable…”, by the  European governments. Such unity among countries shows a decline of US “imperialism” in the southern hemisphere.


According to the Center For Economic and Public Research:


Nearly every country in the region backed the resolution.  The only holdouts were Canada and the U.S., identified in footnotes as refusing to join the regional consensus in support of the resolution.  The US could hardly be expected to condemn its European partners, especially given that their actions have resulted in a particularly serious diplomatic crisis, affecting European relations with a number of Latin American countries.


Rather than try to block the resolution entirely, the U.S. and Canada – which has almost systematically backed the U.S. agenda at the OAS in recent years – chose instead to discreetly voice their opposition in the form of footnotes.  Nevertheless, the two countries’ rejection of the resolution has been noted in the Latin American media; the U.S. in particular appears to be more isolated in the region than ever.

The US, as indicated by a Reuters article, provided its  European allies France, Italy, Portugal and Spain with false Intel, resulting in the countries riding roughshod on international treaties and laws, at the request of the US government.


In a CNN Espanol report, the secretary general of the Organization of American States, Jose Miguel Insulza,  said, “these things leave wounds that are difficult to repair.”


This is not an isolated event, but part of a series of actions on the part of the US that is feeding the growing US isolation in the hemisphere as Latin America frees itself from the imperial yoke after years of historic significance.


America’s longstanding staunch ally, Britain, is possibly treading the same path in its relationship with Ecuador – the constant surveillance of their embassy hosting Julian Assange, as they disregard the sovereign right of the country and international law to offer him asylum.

Spain has since apologized for its part in the events. Spain is keen to maintain historical ties to South America, a growing export market, and has renewed efforts to nurture relationships with Latin America after expropriations last year by Bolivia and Argentina hit Spanish companies.

The disregard of law and  treaties encircling the incident touched a sensitive nerve in Latin America, which has a history of U.S.-backed coups.