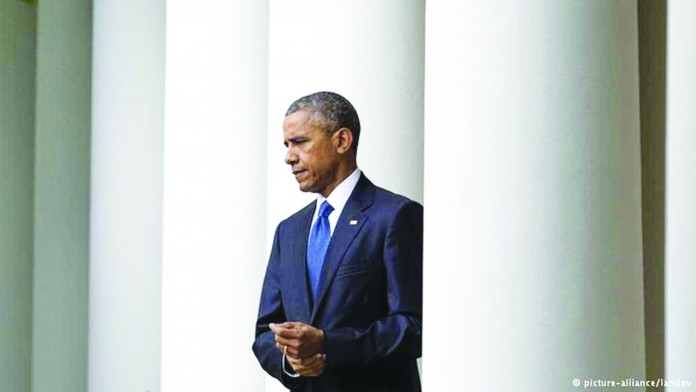 The race for the 2016 Republican nomination has evolved into venomous expressions of bigotry, hatred and Islamophobia, which many Americans, especially the targeted minorities, immigrants and Muslims, find alarming.  The republican candidates have polarized the world with the help of mainstream and social media prompting President Obama to say during remarks following the US ASEAN Summit, “I think foreign observers are troubled by some of the rhetoric that’s been taking place in these Republican primaries and Republican debates.”

Much of the attention and blame for the toxic atmosphere encouraged by republican candidates has been laid squarely at the feet of Donald Trump.  But as President Obama further stated, “I don’t think it’s restricted, by the way, to Mr. Trump.”  In a not so subtle nod to Trump’s often vulgar, hateful and juvenile way of framing his policy proposals, President Obama continued, “I find it interesting that everybody is focused on Trump, primarily just because he says in more interesting ways what the other candidates are saying, as well.”

The republican electoral leaders embrace the hate mongering and Islamophobic sentiments as a means through fear to gain the attention of their constituents. Like Trump, Sen. Ted Cruz, Sen. Marco Rubio and Dr. Ben Carson have all expressed alarmingly bigoted, racist and what some pundits have deemed unconstitutional proposals as well.  This is conspicuously evident when reviewing, among other things, the immigration policies of each candidate.  Trump promised to build a wall on the U.S. and Mexico border targeting our neighbors to the south. And he wants to change immigration laws that would restrict Muslims from entering the country. “So he may up the ante in anti-Muslim sentiment,” said President Obama. “But if you look at what the other Republican candidates have said, that’s pretty troubling, too. He may express strong, anti-immigration sentiment, but you’ve heard that from the other candidates, as well.” Carson recently stated in response to a question during an interview with Breitbart News, of whether American Muslims could embrace democratic values while practicing Islam, “Only if they’re schizophrenic. I don’t see how they can do it otherwise, because you have two different philosophies.” This type of foolish rhetoric serves only to display their ignorance.

While President Obama is correct in his assessment of the overall disturbing state of the republican race to the White House, it’s hard to overlook the fact that a significant portion of American people support Trump.  He is now the undisputed republican frontrunner after solidly crushing his opponents in the recent Nevada Caucuses following wins in New Hampshire and South Carolina and is steadily collecting endorsements.

Former Ku Klux Klan grand wizard David Duke’s endorsement comes as no surprise due to the blatant underpinnings of white supremacy embracing this campaign.  During his radio program Duke called upon all KKK members to support Trump because to do otherwise is treason to their heritage.  He encouraged voting for Trump as a “strategic action” and said, “I hope he does everything we hope he will do.” This is ominous evidence that Trump’s divisive campaign not only promotes hate against innocent Americans but also is energizing and breathing life into the notorious hate group.

Trump, who stated that endorsements mean very little to him, finally landed his first official endorsements from members of Congress.  Both Rep. Duncan Hunter (R-Calif.) and Rep. Chris Collins (R-N.Y.) endorsed Trump the Wednesday after his landslide win at the Nevada Caucuses.  Knowing that an endorsement is not indicative of 100% agreement on all issues it still points to a disturbing reality that too many support his racist and Islamophobic ideas. As Dean Obeidallah wrote in a recent opinion piece for CNN, “If you support Trump, you support his sexist, bigoted and racist views. There are no ifs, ands or buts about it. And this is especially true for GOP party leaders, elected officials and even community leaders.”

Despite the belief that the election of the first U.S. President of African descent was proof positive that this nation had reached a level of understanding and hope, the ensuing years and current climate during this election cycle prove otherwise. The dark cloud that lingers over the U.S. cannot be simply blamed on revolting campaign tactics used to garner votes. Instead, it serves as an eerie manifestation of the current state of racism and anti-ethnic relations in this country.  It has made us re-examine the principles that this nation was founded upon and take an honest look at the direction in which this nation is heading. We now question the notion of what it means to be an American and acknowledge that the symbolic melting pot of our existence may have been merely a dream.  But more importantly, Americans are waking up and more and more know what this country does NOT need.

Despite Trump’s apparent successes and growing popularity, President Obama dismissed his chance of winning the election and expressed faith in the sensibility of American citizens stating,  “I continue to believe Mr. Trump will not be President. And the reason is because I have a lot of faith in the American people, and I think they recognize that being President is a serious job…. Taking a stab at Trump President Obama said, “It’s not hosting a talk show or a reality show. It’s not promotion. It’s not marketing. It’s hard. And a lot of people count on us getting it right … and I think (voters) they’ll make a sensible choice in the end.”

President Obama further warned,  “…As you get closer, reality has a way of intruding.” For many, the reality has already set in.  Americans must take heed, neither Trump, Carson, Cruz or Rubio are worthy of the office of the President of the United States.