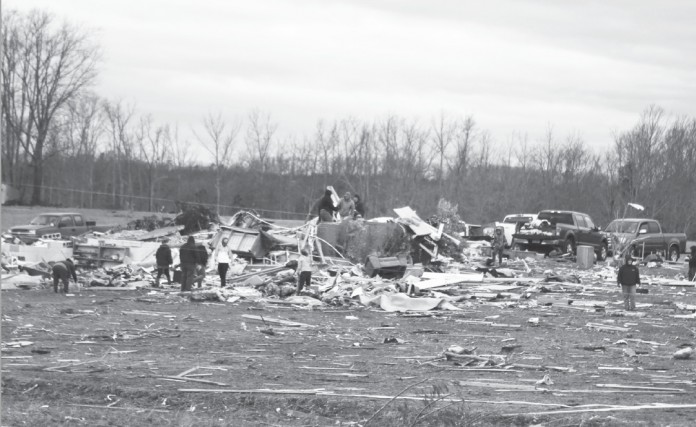 On February 24, a deadly EF-3 tornado approximately 1200 feet wide ripped through Appomattox, VA.  Estimated wind speeds were over 160 miles per hour, and the destruction could be seen for several miles. Footage captured by drones and satellite imagery reveal in stark detail the severe devastation on the ground.  Homes, vehicles, commercial buildings along with natural resource were reduced to rubble.  The total number of affected victims from the tornado and the estimated cost of damages is still unknown.  What is clear is the volunteers needed to assist, the donations for food and money being requested, emergency shelters being filled, and the excessive debris that needs to be disposed of.  This is an indication that the actual devastation is not limited to the natural disaster, but the effects that are left behind.

Although only one person has been reported dead and seven injured, death is enough of a reminder for the believers – particularly, when it occurs from the Almighty Creator’s wrath.  Tornados, hurricanes, cyclones, earthquakes, floods and other natural disasters are the result of the Laws of the Almighty being rejected and/or ignored.  These natural disasters serve as a warning to stop and discontinue sinful acts.  Currently, we are living in times in the United States and throughout the world where there is a total disregard for Divine law.  The Ten Commandments are not followed and adhered to.  It has become commonplace for Christians and Muslims alike to minimize their religious and spiritual importance.  The result: catastrophic events that force humanity to rethink faith and belief or the lack thereof.  This phenomenon is known as the Law of Return of Deeds, which may be more commonly recognized as, “you reap what you sow”.

Accordingly, the Almighty responds to the deeds of Mankind, whether good or bad. Just as there are consequences for bad deeds in the form of drought, earthquakes and tornadoes; good deeds come back in the form of good health and prosperity. Adhering to the Ten Commandments and the immutable laws of The Almighty Creator serve as a protection from so-called natural disasters. The Muslim community of Ahmadabad, located near Appomattox, Virginia was completely unscathed.  This is a blessing from the Creator for living righteous lives, enjoining what is right and forbidding what is wrong.

“In the Name of Allah, the Merciful, the Compassionate.  Say: “He is Allah, the One and Unique; Allah, Who is in need of none and of Whom all are in need; He neither begot any nor was He begotten, and none is comparable to Him”. “ (Holy Qur’an, Chapter 112)