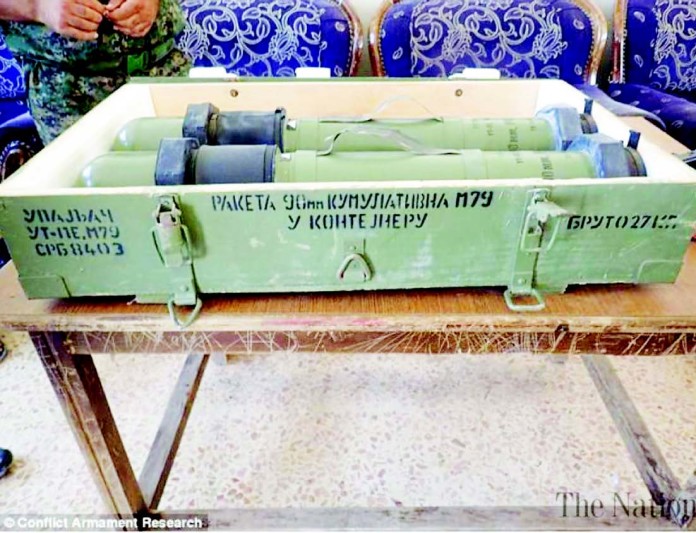 A new report from a prominent human rights group has found that ISIS has built a substantial arsenal, including U.S.- made weapons obtained from the Iraqi army and Syrian opposition groups.

Amnesty International’s 44-page report, released on December 7, found that much of ISIS’ equipment and munitions comes from stockpiles captured from the U.S.- allied Iraqi military and Syrian rebels.

The findings come as President Barack Obama has recommitted to leaning on regional forces, including the Iraqis, Kurds and Syrian opposition, to try to wipe out ISIS rather than committing significant numbers of U.S. ground troops.

“The strategy that we are using now — airstrikes, (U.S.) Special Forces and working with local forces who are fighting to regain control of their own country — that is how we’ll achieve a more sustainable victory,” Obama said in his address to the nation. “And it won’t require us sending a new generation of Americans overseas to fight and die for another decade on foreign soil.”

These local forces will receive assistance in the form of weapons, backup via coalition airstrikes and training from U.S. special operations forces.

The Amnesty International report, however, concluded that it was these local forces that had inadvertently contributed arms to ISIS.

After analyzing thousands of videos and images taken in Iraq and Syria, Amnesty determined that a large proportion of ISIS’ current military arsenal is made up of “weapons and equipment looted, captured or illicitly traded from poorly secured Iraqi {U.S. backed] military stocks.”

ISIS has also gained access to weapons from other sources through the capture or sale of military stocks supplied to armed opposition groups in Syria by countries including Turkey, the Gulf States and the U.S., according to the organization.

Amnesty International found that the quantity and range of ISIS’ arms and ammunition “ultimately reflects decades of irresponsible arms transfers to Iraq and multiple failures by the U.S.-led occupation administration to manage arms deliveries and stocks securely, as well as endemic corruption in Iraq itself.”

By failing to account for the weapons that have been transferred to Iraq over the last several decades, the U.S. and other supplier nations have allowed them to freely flow through the region and fall into the hands of ISIS and other armed groups in the region, the human rights group charged.

“It is mainly old stock, but they do have some more sophisticated weaponries that were more recently manufactured,” he said.

One of the most common types of weapon used by ISIS fighters is the AK automatic rifle, and ISIS forces are also equipped with U.S. military-issue M-16s and guns manufactured in China, Germany, Croatia and Belgium, according to the report.

It also said that ISIS has captured large numbers of U.S.- and Russian-made armored vehicles in addition to mortars, anti-tank missiles and surface-to-air missiles from the Iraqi army and Kurdish forces.

In response to the report, Pentagon spokesman Maj. Roger Cabiness told CNN that the U.S. closely monitors equipment provided to partners in order “to prevent and detect illegal transfers to third parties, in order to protect American technology, and, where relevant, to ensure partner compliance with requirements placed on all recipients of U.S. defense articles.”

However, the Pentagon admitted that these monitoring programs don’t apply to equipment that is lost on the battlefield.

Despite ISIS diversity of weapons, Wilcken said it is difficult to assess whether or not the group has the firepower to consistently defeat Kurdish and other militia forces in Syria.

He said ISIS was able to effectively use some of its more sophisticated weapons, specifically anti-tank missiles, to capture the Iraqi cities of Mosul, Tikrit and Fallujah last year but has recently resorted to using improvised explosives, rather than conventional weapons, to inflict mass casualties on enemies.

These weapons have not only increased ISIS’ effectiveness on the battlefield against U.S.-backed local forces, but have been used in human rights abuses and violations of international humanitarian law across Iraq and Syria by ISIS, according to the report.

In order to avoid further proliferation to armed groups in the region and the misuse of these weapons by groups like ISIS, Amnesty International is calling for supplier states, including the U.S., to work with Iraqi authorities to quickly implement stricter controls on the transfer, storage and deployment of arms.

“The big takeaway for us is that you have to look historically at this and the long process whereby states often recklessly and irresponsibly send arms to Iraq … often in a very uncoordinated and chaotic manner,” Wilcken said.

Even if ISIS is uprooted, other armed groups will be there to take their place if the issue of proliferation continues, he said.

Editor’s Note: The fact has been documented by numerous academics, political analysts and news sources, and advocates against the proliferation of the carnage in Syria and Iraq, that the major forces behind ISIS are the western nations, the Saudis and their Gulf state cohorts and Israel. These same forces have aggressively proliferated the hegemony in the middle east and other parts of the world for decades, most tragically in the destruction and destabilization of Iraq, Libya and Afghanistan. Halting the flow of armaments – the actual objects of violent aggression – is key to decreasing the incessant bloodshed and destruction that these the enemies of peace hope will render the world’s resources and its people under their complete control. Thus, the efforts of Russia and other nations who are actually inflicting substantial damage to the armament depots, stockpiles, transport and manufacturing sites are being applauded by the rest of the world – targets so elusive to the ones who armed and equipped the terrorists.