The UK should be more proactive about imposing sanctions on banks and countries suspected of funding or supporting the militant group ISIS, the leader of the Labour party has said. Jeremy Corbyn told David Cameron to push for an economic crackdown with the rest of the European Union, claiming the terror group was being provided with “vital infrastructure”.

“Surely a crucial way to help defeat ISIL is to cut off its funding, its supply of arms, and its trade,” he said at Prime Minister’s Questions in the House of Commons recently.

“Will he, through the European Union and other forums if necessary consider sanctions against those banks and companies and if necessary countries which turn a blind eye to those who do dealings with ISIS, who assist them in their work?”

In the immediate aftermath of the Paris terror attacks Mr Corbyn had named Saudi Arabia as a country that was not doing all it could to fight the militant group. He argued that “Saudi Arabia, maybe not at Government level, but certainly at aid-level, has been providing support to ISIL.”

David Cameron replied to Mr Corbyn that the UK was already playing a “leading role” in cutting off support. He also warned that economic action should not be Britain’s only response to the group. “We cannot dodge forever the question of how to degrade and destroy ISIL both in Iraq and in Syria, … yes, go after the money, go after the banks, cut off their supplies, but don’t make that a substitute for the action that’s required to beat these people where they are,” he said.

Mr. Cameron’s bid to have British airstrikes extended to Syria where ISIS is also operating, was successful and Britain initiated its “offensive operation”, on Dec. 3.

French and American planes are already bombing the militant group there.

They were joined by Great Britian after a parliamentary vote on intervention was passed.

Mr Corbyn, in particular, has said that airstrikes could simply bring more “mayhem” and has called for a negotiated political solution to the conflict involving major regional players, including Iran and Turkey.

The militant group ISIS, which refers to itself as Islamic State, claimed responsibility for the gun and bomb attacks in Paris which killed over 100 people. 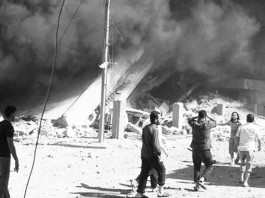