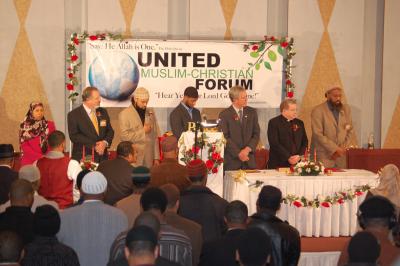 “They intend to put out the Light of Allah with their mouths. But Allah will complete His Light even though the disbelievers hate (it).” – Holy Qur’an 61:8

In this small, quiet town, during one of the most festive times of the year when love and reverence for Jesus, born of the chaste Mary, is widely celebrated by Christians the world over, the United Muslim-Christian Forum (UMCF) embraced these auspicious weeks as an occasion for mankind, the family of God Almighty, to come together in unified adoration and veneration of the birth, character, and  life of the Messiah, Jesus, son of Mary, the Pure and his noble contributions to humanity.

BINGHAMTON — In this small, quiet town, during one of the most festive times of the year when love and reverence for Jesus, born of the chaste Mary, is widely celebrated by Christians the world over, the United Muslim-Christian Forum (UMCF) embraced these auspicious weeks as an occasion for mankind, the family of God Almighty, to come together in unified adoration and veneration of the birth, character, and  life of the Messiah, Jesus, son of Mary, the Pure and his noble contributions to humanity.

The spirit of peace, love, and goodwill flowed freely in waves upon the hearts of the devotees in attendance. UMCF was initiated by the great philanthropist and founder of the International Qur’anic Open University, His Eminence El Sheikh Mubarik Ali Shah Gilani Hashimi, in an effort to join the hands of Muslims with their Christian brethren, as the two are aspects of the same reality: both believe in the blessed Spirit of God, in Jesus son of Mary and his Gospel. UMCF was founded upon the unshakable principles that ‘Mankind is the Family of God;’ a firm belief in the One Almighty Creator; adherence to the Ten Commandments; and fulfillment of the Golden Rule, “Do unto others as you would have others do unto you.”

The Reason for Creation, The Holy Last Messenger, Muhammad (peace be upon him), said: “The Messengers are like brothers. They have different mothers but their way of life is one. I am the closest of all the people to Jesus son of Mary, because there is no other Messenger between him and myself. He will come again and when you see him you will recognize him. He is of medium height and his color is reddish-white. He will be wearing two garments, and his hair will look wet. He will uphold the unity of God and will bring Muslims and Christians together.”
The Anointed One, Jesus, son of Mary the Pure, said to his disciples when he ascended Mount of Beatitudes in Palestine: “Blessed are they which do hunger and thirst after righteousness: for they shall be filled. Blessed are the merciful: for they shall obtain mercy. Blessed are the pure in heart: for they shall see God. Blessed are the peacemakers: for they shall be called the children of God.”

Upon entering the beautifully decorated Empire Ballroom of a Binghamton hotel to attend this celebration -the first of its kind- an atmosphere of love and brotherhood reverberated around the room and enveloped every newcomer. The program started with all standing as the Tennessee Islamic song group, Banaatu Salaam, (Daughters of Peace) performed an inspiring rendition of the National Anthem. Master of Ceremonies, Mr. Idris Johnson, made a short and inspirational prayer thanking Almighty God for this auspicious assembly of peacemakers, those who thirst after righteousness while gathered in a world of turmoil. With this, all were asked to look to the right and left, and while clasping hands with their neighbors, to declare, “You are my brother (or sister).” This unique gesture of love delivered with such warm-hearted enthusiasm hit the mark.

UMCF Public Relations Director Mr. Muhammad Hasib Qadri followed with a welcome address by confirming: “Peace will be realized with the return of Jesus son of Mary when he, by Almighty God’s grace, will unite the two great religions of Christianity and Islam as one. It is written. Have no doubt. God’s will shall be done.”
The guest speakers then took the podium, starting with Father John P. Donovan of St. James Catholic Church of Johnson City, who expounded upon the illustrious noble character of  Jesus, the Messiah, and our obligations, as those who love and revere him, to serve mankind.

Next, Binghamton Mayor Matthew Ryan greeted the audience with the Islamic greeting of peace, “As Salaamu Alaikum.” Mr. Ryan said that after extensive research seeking to discover any other instances where Muslims and Christians were coming together to celebrate the birth of the Messiah; he was saddened to find no others had taken this historic step.  Yet  the Mayor also felt the community members residing in Binghamton and the surrounding areas deserved congratulations for being the first to have such a historic event, and he was honored to be a part of the festivities. Mr. Ryan has done much to maintain working relationships with the diverse members of his city.

Next, Rev. Arthur Suggs of  First Congregational Church of Binghamton began his speech in the name of Almighty Allah.  He noted that while the outer self keeps one involved in things of this world, the inner self seeks unity with its Creator. Rev. Suggs continued by sharing two things he holds dear and keeps in his office. One is the statue known as ‘Madonna and Child.’ “When I look at the affectionate way the holy mother looks at her child, I am reminded of how the Almighty views us, His creation, and His love and concern for us all.” Rev. Suggs then pointed to the back of room where Arabic calligraphy of the 99 Most Beautiful Names of Allah had been hung and reaching into his pocket, pulled out a small rosary on which he said were 33 beads and three counters. The reverend mentioned that he often sits and contemplates His Creator and calls on Him by His 99 Attributes, each one in turn, using the beads. “Just imagine the place you reach when you call on God by His Most Perfect Names, Most Merciful, Most Kind, Most Loving, Most Beautiful,” he earnestly exhorted the audience while turning each bead.

AbdurRahim Harleston-Aliy then performed the famous hymn, Amazing Grace. Each word was clear and crisp and delivered with such feeling that no eye was dry by the time he finished.

The Hon. Khalifah Hussein Adams, chairman of the Muslims of America, followed by encouraging our Christian family to return to the ways of the Messiah, Jesus son of Mary (perpetual peace be upon them), by adhering to and following the Ten Commandments, and by practicing what Jesus did and staying away from what he forbade. Mr. Adams quoted these insightful and powerful words: “Some of his disciples asked the Blessed Jesus, how he was able to walk on water. He replied through certainty of faith. They said, ‘But we too have certainty,’ And so, Jesus, the Messiah, said, ‘Do you believe that mud, stones, and gold are all equal in your sight?’ They said no. Then he said, “They are all the same in my sight.”

The Hon. Hussein Adams, who was also appointed Ambassador for Peace by the Universal Peace Foundation (UPF), spoke briefly about a charter for unity and peace that will soon be presented to leaders all over the world as well as interfaith counsels. Thereby the world will come together and pledge that no longer will Muslims and Christians be duped into fighting.

“We state that our Christian brethren are closer to us than [the sects] Wahhabis and Shias. We know the third party whose hidden hand is trying with all its might to bring about the ultimate clash of civilizations between Muslims and Christians.” Assuring all those present, the Honorable Khalifa went on to declare that “this will not happen!” He also stated that although so-called Christians like Christian Action Network (CAN) aim to create and incite hatred, they have been exposed and will continue to be exposed.

Dr. Jawairriya Abdallah-Shahid, who had the distinction of being the only lady on the panel of speakers, then spoke on the noble character of the chaste and pure mother of The Messiah, Mary, who was the daughter of Prophet Imran (upon them be peace): “It is only fitting and my duty, that I mention his mother the Honorable Mary, or Maryam as said in Arabic. Mary’s status in Islam is so great that there is an entire chapter in Holy Qur’an named in her honor. Islam does revere and honor Mary (peace and blessings be upon her) as an icon of faith, an example to believers and mother of the Messiah, Jesus (upon him be peace).”

Dr. Abdallah-Shahid continued: “The luminous birth of Jesus was a miracle and mercy to mankind. His life on earth was spent helping and healing mankind along with performing miracles with the permission of the Almighty. In addition to leading the people to worship and perform acts of obedience to God, Jesus son of Mary affirmed and upheld the teachings of Moses (upon him be peace) and the prophets who came before him. When asked what the first commandment was, Jesus (peace be upon him) responded with the Hebrew verse, “Shama Israelu Adonai lla Hayno Adonai ikhad” “Hear, O Israel; The Lord our God is one Lord” (Mark 12:29).”

The final performance of song was given by Ansarudeen who sang ‘Radiant Star’ written for this occasion about the Blessed Jesus, son of Mary, the Pure.
“He’s a shining radiant star amongst men.
He’s a king by far and his friend is the Almighty;
and we strive just to be like him.”

The evening concluded with Hon. Khadijah Smith, deputy chairwoman of Muslims of the Americas, bestowing gifts to the speakers that had been sent by His Eminence El Sheikh Mubarik Ali Shah Gilani.