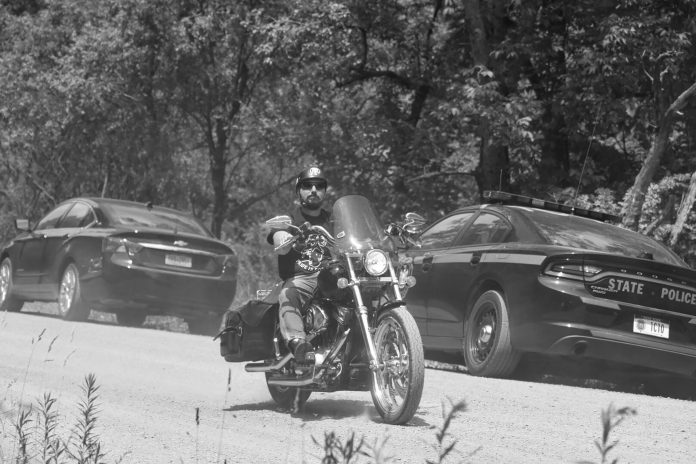 The Muslims of America, Inc. (TMOA) continues to be victimized as part of an ongoing hate campaign, fueled by racist and Islamophobic elements that are now emboldened by the Trump administration. For the past 3 years, ‘American Bikers United Against Jihad’ (ABUAJ), an extremist group founded by Rami Lubranicki, has descended outside the village of Islamberg in Upstate NY for an annual ride to purportedly ‘bring awareness to the issue of national security’. In fact, the ride’s true purpose is to disturb the peaceful lives of the American Muslim community.

In 2016, Rami Lubranicki was the first to incite self-proclaimed patriots to target the residents of Islamberg. To the dismay of Lubranicki, the rally comprised of a meager 5 bikers who arrived committed more to the free food provided after the ride, than wasting their gas money stalking and harassing a group of model citizens, who are a source of unity for their local Hancock, NY community and other communities around the country. In a show of solidarity, hundreds of people from around the nation gathered in Islamberg for a peace rally far outnumbering the amount of bikers present. The outpouring of support also included the city of Oneonta, NY issuing a proclamation affirming its solidarity with the residents of Islamberg and its commitment against tolerating hate within our country.

Last year, ABUAJ did not fare much better in garnering support for its misguided cause. Barely doubling its numbers from the previous year, the insignificant crew uneventfully drove by the entrance to Islamberg. On Saturday, July 14, in an effort to avoid giving undue publicity to ABUAJ, Islamberg residents, its neighbors, and interfaith partners decided to ignore the group of anti- American troublemakers. Again, the number of participants was embarrassingly mediocre. However, the presence of the New York State Police guarding the entrance to Islamberg was testament to the true threat to national security, which stems from the promulgation of debunked lies concerning the residents of Islamberg.

A potent reminder of the danger inherent in wrongfully accusing and targeting innocent men, women, and children can be found in the case of convicted terrorist, Robert R. Doggart. Federal agents arrested Doggart in April of 2015 for soliciting others in a plot to burn down the village of Islamberg and kill its residents. Doggart attributed the motivation for his foiled plot on the falsehoods about Islamberg repeatedly proffered by Ryan Mauro and broadcast by the FOX News Channel.

Interestingly, Islamophobe Joseph Glasgow, who organized this year’s ride, was a no-show. Although he recruited individuals to participate, like the coward he is, Glasgow bowed out of his own event. Just hours before his supporters were scheduled to assemble for the ride, he wished them luck posting on Facebook, “I am moving today and can’t make it, but please realize that what you are doing is a great service to your country.”

Since last year’s event, Mr. Glasgow has been prolific on social media spewing Islamophobic vitriol and propaganda, inciting his cohorts to harass a peaceful community of patriotic American Muslims. Glasgow, Lubranicki and those of their ilk are not true patriots. In fact, their version of patriotism is in reality ill-disguised racism and a choreographed effort to bring about a clash between Muslims, Christians, and Jews. This is an abysmal insult to Americans who love and serve their country, particularly the members of TMOA who understand that Americans living in harmony – regardless of religious beliefs- is a true mark of patriotism and what makes this nation great. It is unfortunate that Mr. Glasgow has successfully duped ignorant people into participating in this most un-American event.

The Muslims of America, Inc. remains committed to saving, educating and uplifting American youth who would not be given a chance otherwise. The Vice Chancellor of TMOA, El Sheikh Syed Mubarak Ali Shah Gillani, has done more to help American citizens than these pseudo-patriots could ever dream of. Holy Islamberg, and other TMOA communities, are not mysterious places that are involved in immoral or illegal activity. Rather, these Islamic villages are safe havens from crime and immorality, and give children the best opportunity to serve their country and practice their religion as the United States Constitution has allowed them.

As for the American Bikers United Against Jihad – they came, they saw, and they wasted taxpayer dollars, once again.