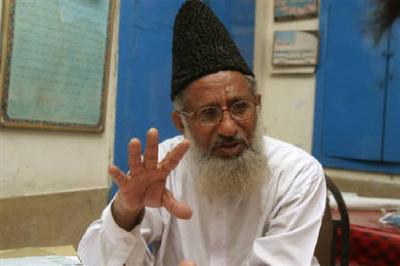 The Council of American Ullema Revived.

In a recent meeting with respected Qadri Sheikhs and Sunni Ulema, El Sheikh Syed Mubarik Ali Shah Gilani Qadri, Vice Chancellor of the International Qur’anic Open University and Ghaddee Nasheen (spiritual head) of the Holy Shrine of Hazrat Mian Mir Qadri, Lahore, head of the Sufi Qadri Order has declared that under no circumstances will a Talibanization of Pakistan be allowed. El Sheikh has stated that such an situation is not possible, though remote chances do appear to exist, taking into account that Mulla Fazul Rahman and Kazi Hussain Ahmad have not, to date, condemned the Taliban so far. And this, despite the fact that the latter have burned Holy Shrines and attacked innocent citizens by way of suicide bombings and are also targeting the Pakistan Army.

Sheikh Gilani stated: “What I foresee is that, in the future, we might have to join hands with our army as we did in the previous wars to combat the scourge of the Taliban who have brought shame to Islam by their vicious onslaught upon innocent people and their shameful deeds against humankind.”

The Vice Chancellor also expressed with firm sentiment that, given the increased daily bombings by the Taliban, the people of Pakistan should close ranks against the onslaught of Wahhabi extremism which, in fact, is their Global Order, which spares no non-Wahhabi, be they Muslim, Christian or Jew.

The meeting, which Sheikh Gilani addressed, was attended by prominent Sufi Qadri sheikhs and Sunni Ullema (religious clerics). At the end they collectively prayed for the departed soul of Dr. Sarfraz Naeemi who was martyred in his world renowned Islamic university, Jamia Naeemia, by a Taliban bomber because of his open condemnation of the Taliban.

Dr Naeemi’s death also came as a great shock and mournful event to American Muslim scholars as he had taught many of them during the 1980s and 90’s. Students from the International Quranic Open University, who studied under his tutelage, will always remember him with the highest regard as a great teacher and scholar. It was therefore decided to erect a memorial in his honor on the premises of IQOU Islamberg, New York. A sincere prayer was offered that Allah grant steadfastness and firmness to his son who has taken over his duties, and the fact that the Wahhabis stayed away from offering condolences and sympathy for the great scholar of Islam came as a surprise to no one.

American Muslim Scholars have determined to revive the Council of American Ullema. It will serve as a beacon of light that will guide Muslims in the right direction while adhering to Islamic law. This council will also diligently work towards world peace and unity between people of monotheistic faiths, one of the major aims of Holy Quran. The Council’s ministers will effect a campaign against terrorism, extremism, suicide bombing and indiscriminate killing of men, women and children in the name of Islam. These activities are being perpetrated and sponsored by Wahhabi extremists.

The Council of American Ullema have resolved to support and promote Islamic Scholars who have and are upholding true Islamic values of peace and tolerance. They will condemn Taliban style suicide bombings and aggression, such as the murder of Dr. Naeemi, whose life was taken in cold blood (June 12, 2009) by Wahhabi backed Taliban extremists.

A committee has been set up which will correspond with Islamic scholars all over the world and invite them to an international seminar to be held either in Islamberg, New York or the Washington, DC. Heads of all major Islamic Institutions, colleges and seminaries will be contacted inlcuding the Grand Mufti of Al Azhar University, Cairo, Egypt and other ullema representing the Muslim world. The international seminar will be inclusive of Muslim ladies as well, such as Durdana Shakir Azharia and Safia Abdus-Salaam Azharia.

Proposals and suggestions are welcomed and can be conveyed to the Information Officer, Maulana Hasib Abdul Haqq. Endeavors will continue to bring about unity between Muslims and Christians in coordination with the United Muslim Christian Forum. Since its inception three years ago, and in alliance with the Christian community, UMCF has recently sponsored its first annual celebration of the Birth of Jesus son of Mary in addition to celebratory processions already held to commemorate the birth of the Holy Last Messenger (peace be upon him). These efforts are bringing peace and prosperity to the USA and the world. In a recent meeting with respected Qadri Sheikhs and Sunni Ulema, El Sheikh Syed Mubarik Ali Shah Gilani Qadri, Vice Chancellor of the International Qur’anic Open University and Ghaddee Nasheen (spiritual head) of the Holy Shrine of Hazrat Mian Mir Qadri, Lahore, head of the Sufi Qadri Order has declared that under no circumstances will a Talibanization of Pakistan be allowed.