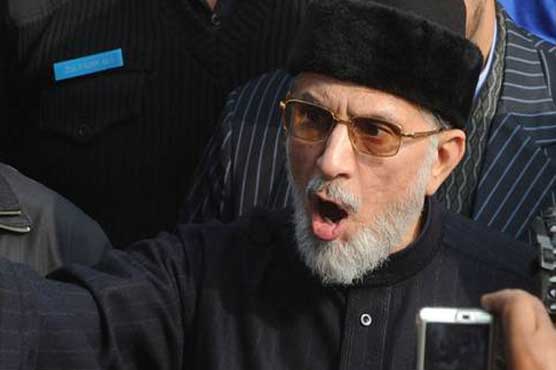 Today Muslims are afflicted with a plethora of non-qualified, yet heavily funded Muslims with self-serving agendas masquerading as Islamic scholars or leaders, an extremely detrimental predicament. Non-Muslims are also affected by this because they are left to form incorrect concepts that are looked upon as being authentic to Al-Islam, thus further promoting increased inaccuracies, falsehoods, and deviance hurled upon the character and perception of Muslims in general. Muslims are strongly advised to distance themselves from such mountebanks who claim for themselves lofty titles and suffixes that hold a high rank with Muslims, such as Shaykh-ul-Islam. Amongst the aforementioned pretenders mentioned is that of a power-hungry politician, posing as a member of the venerable Qadiri Sufi order, who has titled himself Shaykh-ul-Islam and is operating under the name “Dr. Tahir-ul-Qadri”.

Tahir-ul-Qadri now has dual Pakistan/Canadian nationality, having pledged his allegiance to the British Queen in order to gain citizenship.

The title Shaykh-ul-Islam is neither given frequently or without merit and is, as Al-Hafiz Shamsuddin Al-Sakhawi (may Allah be pleased with him) elaborated in his Al-Jawahir al-Durar, “a title attributed to that follower of the Book of Allah Most High and the example of His Messenger, who possesses the knowledge of the principles of the Science (of Religion), has plunged deep into the different views of the scholars, has become able to extract the legal evidences from the texts, and has understood the rational and the transmitted proofs at a satisfactory level.”

Al-Sakhawi added that, “At times, this title is given to those who have attained the high station of friendship with Allah Ta’ala (Al-Wilāya), and from whom people derive blessings both when they are alive and when they are dead. Similarly, whoever has tread the true path of the People of Islam and has come out unscathed from the folly and ignorance of youth; and whoever has become a living apparatus for others in solving difficulties or winning a struggle, and a refuge in every difficulty: these are the meanings of the word as used by the general public.”

The history of the actions and statements of Tahir-ul-Qadri are an antithesis of the definition of an authentic Islamic scholar in letter and spirit, and are —without doubt— the antithesis of the definition of one who would rightfully be titled Shaykh-ul-Islam. He is guilty of having related extreme falsehoods in the course of his self-promotion, such as (in his own words), “I have been and still am taught daily by that of Al-Imam Abu Hanifa and Imam Jalaluddin Al-Suyuti.” Unfortunately, this lie is shamelessly vaunted on the internet through his organization’s social media.

The statement “actions speak louder than words” holds true, and the shameless actions of Tahir-ul-Qadri nearly caused a major international incident, which he deliberately planned with Iranian funding, along with other hidden hands seeking to destabilize the country of Pakistan. In 2014, Tahir-ul-Qadri orchestrated a revolution in which he desired to mimic in Pakistan “that of the revolutions in Libya, Egypt, and the Arab Spring”. Had he attained success in his plans for a “revolution” in Pakistan, the disastrous results would have been much worse than the civil war that would have ensued because foreign military intervention would have been mandated since Pakistan is a nuclear-armed nation. Thus, with Iran hoping for the opportunity to control Pakistan, the magnitude of such an international incident would have been horrific.

The points established here are simple:
1.) Never has any Shaykh-ul-Islam started or attempted to instigate international incidents for the sake of installing himself in a seat of power and authority. 2.) Obscene, baseless claims and quackery have never been the attributes of any authentic Shaykh-ul-Islam in the history of Al-Islam, especially when the attempt has been made to leverage the august personality of Sheikh Abdul-Qadir Jilani (may Allah be pleased with him).

Tahir ul Qadri claims that he was bestowed the title of Shaykh-ul-Islam by Sheikh Abdul-Qadir Jilani (may Allah be pleased with him). Yet, not a single authentic Sheikh of the Qadiri Order has ever confirmed or authenticated the claim. In fact, the Mashayekh of the Qadiria and members of Ahlul-Bayt convened to denounced him: “In conclusion of this meeting, after meticulously scrutinizing all evidence and arguments, all attendees present unanimously denounced Mohammed Tahir (alias Tahir-ul-Qadri) as a fake Qadiri, and is thus disowned by Ahlul-Bayt and the Mashayekh of the Qadiri Order.”

This individual was previously directly addressed by the American Azhari Ulama and proven guilty of fraudulent behavior combined with spiritual blackmail, as well as “blatantly and openly violating the principles regarding migration to non-Islamic countries and oaths of allegiance—a process that mandates a direct oath of allegiance to the Queen of England, a Mushrika.” (Fatwa Issued Against a Self-Styled Shaykh-ul-Islam’s Allegiance Taken to a Polytheist Ruler, February 17, 2013)

The Muslim community at large and the non-Muslim community are both strongly advised to stay away from the mountebankery of such individuals who intentionally exploit the ignorance of both masses for their own personal gains. Tahir-ul-Qadri is not to be considered upon the titles he has invented for himself, nor as an authority of the Sufi path, nor as an authority of matters pertaining to Islamic sciences.