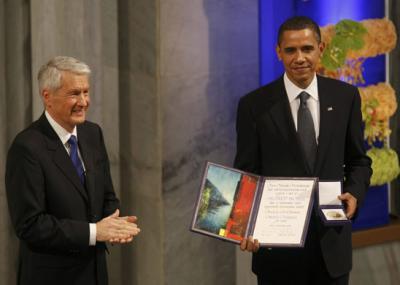 Having served less than a year in office, US President Barack Obama humbly accepted the news of winning the
Nobel Peace Prize on Friday, October 9.

The President said in a statement: “To be honest, I do not feel that I deserve to be in the company of so many of the
transformative figures who’ve been honored by this prize –men and women who’ve inspired me and inspired the entire world through their courageous pursuit of peace.

“But I also know that this prize reflects the kind of world that those men and women, and all Americans, want to build, a world that gives life to the promise of our founding documents. And I know that throughout history, the Nobel Peace Prize has not just been used to honor specific achievement; it’s also been used as a means to give momentum to a set of causes. And that is why I will accept this award as a call to action, a call for all nations to confront the common challenges of the 21st century” and to work toward greater international harmony and more
environmentally sustainable practices. According to Voice of America, the comments came hours after the unexpected announcement in Oslo. Nobel Committee chairman, Thorbjoern Jagland said the committee attached special importance to the President’s "vision of and work for a world without nuclear weapons."

Jagland also praised Mr Obama for what the committee called "his extraordinary efforts to strengthen international
diplomacy and cooperation between peoples." President Obama, however, said he views the award not “as a recognition of my own accomplishments, but rather as an affirmation of American leadership on behalf of aspirations held by all people."