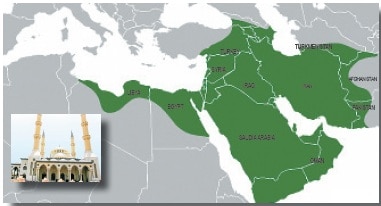 On the first day of the sacred month of Muharram,the first month of the Islamic calendar, the martyrdom of Hadhrat Umar ibn Al-Khattab (may Allah be pleased with him), a blessed Companion of the Holy Last Messenger, peace and blessing be upon him, occurred.

From a large, prominent family of the Quraish,the ruling tribe of Mecca, he was born forty years before the Hijra,when the Muslim converts from Mecca migrated to Yathrib – a nearby city which embraced the ruthlessly persecuted new Muslims and their Divinely-inspired leader.

Hadhrat Umar, may Allah be pleased with him, was a literate man, with knowledge of the Holy Bible and able to speak Hebrew. He became a merchant, a popular occupation at that time, and his travels led him to Iraq, then part of the Persian Empire. For the first seven years of the mission of the Holy Rasul (peace and blessing be upon him) he was a sworn enemy of Islam, along with Abu Jahl. He would abuse anyone he thought had embraced it, believing that this new religion was creating an immense problem for the Quraish and deciding that the Holy Last Messenger Muhammad, peace be upon him, should be killed. When starting out to fulfil that realization, an acquaintance inquired, “Oh Umar, where are you going?” Ibn Al-Khattab replied, “Today I’m going to finish Rasulullah and then we shall have peace!” The person told him to first of all go to his sister’s house, as she and her husband already embraced Islam. Upon his arrival at the home of his sister, Hadhrat Umar heard the recitation of a portion of the new revelation from Allah Almighty, while standing outside of the door. Hearing his angry voice, the blessed text was immediately hidden and he was permitted inside. Enraged by his sister’s response to his query about what he had heard, and the confirmation that she and her husband had indeed become Muslims, Hadhrat Umar struck his sister, causing her mouth to bleed. However, it broke his heart to see her hurt and what is more – he knew that he must submit to the Truth that faced him and all of Quraish as well. He asked to see the text which had been recited; it read, “Everything in the heaven and on earth glorifies Him, and Allah is Almighty and All Wise.” Upon reading the sublime words, he started to shiver,having a feeling of being overpowered. He was not aware that on that very day, the Holy Last Messenger,peace be upon him, made a prayer to Almighty Allah petitioning, “Oh Allah, we are weak, give us strength by allowing Umar ibn Khattab or Abu Jahl to become Muslim.” The incident with his sister had caused Hadhrat Umar’s conversion from a state of disbelief to complete submission to Almighty Allah and unyielding loyalty to the Holy Last Messenger, peace and blessings be upon him. He continued on to see the blessed person through whom the powerful words had been revealed. When the Holy Last Messenger (peace and blessings be upon him) was informed that Hadhrat Umar had come with his sword, Hadhrat Hamzah (Allah be pleased with them both), himself a passionate new Muslim said, “Let him come – I will kill him with his own sword!” Hadhrat Umar entered and immediately declared “I bear witness that there is no God save Allah and that Muhammad is His Messenger(peace be upon him)!”.

Appropriately called by historians ‘Umar the Great’, he was the strongest man of Islam, a great statesman, and warrior. He became the second Khalifah, or successor after the Holy Last Messenger, peace be upon him, who stated, “Where Umar goes, Shaitan [the devil] runs away”, and who (upon him be peace) also attested ,“And had there been any messenger after me, Umar would have been a messenger, but there is no messenger after me.”

Hadhrat Umar (may Allah be pleased with him) was not only a man to be feared, he was a loving father. Once he appointed a person governor. The Khalifa’s small son came and he picked him up, hugged and kissed him. The newly appointed governor asked, “You kiss your children?” Hadhrat Umar replied, “Yes and give me the paper.” He took the appointment paper from him, and requested him to leave, stating “If you do not have love, how can you rule people?”

Hadhrat Umar Ibn Khattab (Allah be pleased with him) ruled with unwavering justice, enforcing the edict that the poor and privileged, wealthy and weak, received equal treatment under the law of Islam. He was kind to anyone, including Christians and Jews.

He was the greatest conqueror of the world, bringing Persia, Syria and 2.2 million square miles of territory under the dominion of Islam. Regarding this extraordinary accomplishment, Hadhrat Umar (Allah be pleased with him), with a sense of devout humility, said, “It is because of Allah, [that ]victories are following, one after another.” Many of the countries conquered during the reign of Hadhrat Umar ibn Khattab, (may Allah be pleased with him)are under Islamic sway to this day, with many of the buildings still intact. Whereas, in Algeria, Iraq, Syria, Persia and the countries conquered by the Roman Empire, its buildings are in ruin or have vanished. It was under Hazrat Umar’s leadership that Islam made its largest and fastest expansion. During his reign, Muslim forces conquered Syria, Jerusalem, Egypt, Libya, Iraq, and the armies of Persia. Hazrat Umar was a person of great individual strength and frotitude. He was one of the two ‘Umars’ whom Rasulullah (peace and blessings be upon him) asked Allah to bless with Islam.