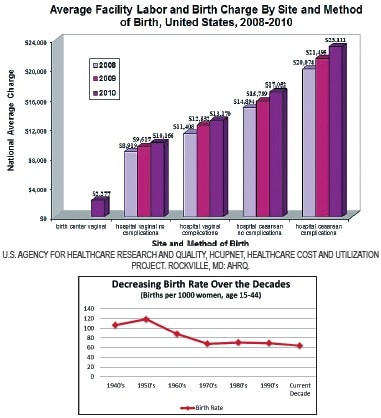 Recently, a young couple from a Tennessee community went to the hospital, sure that the birth of their first child was imminent. However, not being aware of what to expect, they succumbed to the pressure to have the mother’s labor induced through use of dangerous medications that supposedly hasten the baby’s birth, rather than giving the birthing process a chance to progress naturally. Soon after the induction, the baby began experiencing distress and complications. After forty hours of induction medications, narcotic painkillers, and an epidural to numb the mother from the waist down, the attending doctors had no choice but to perform a Cesarean Section (C-Section) to surgically remove the baby. Was this procedure medically necessary for a healthy young woman with no pregnancy complications? The surreptitious use of C-Sections places the mother at risk and also endangers the very life of the child. Gone are the days of emergency Cesarean sections used to prevent the death of mother and child.

Today, this surgical method of birthing has been designed to increase health risk and yet, medical practitioners and hospitals continue to forge this path of torture on expecting mothers causing permanent decline to the birth rate; an underhanded method of population control. Around the globe there is an alarming rise in the number of C-Sections being performed to replace the natural birthing process. In 2007, a study by the Center for Disease Control (CDC) revealed that one in every three live births in the United States was delivered by Cesarean Section. This represented a 71% increase over the C-Section rate in 1996. China, a country with major concerns and initiatives to address population growth, has a staggering 50% C-section rate.

The dangerous combinations of drugs used to induce birth such as Cytotec (Misoprostol), Oxytocin, Pitocin, and Cervidil in fact lead to brain damage in infants, birth defects, uterine rupture, increased infant heartrate (in turn cited as first reason to move forward with C-Section), and even death.

There are two major reasons for the increase in this dangerous surgery. Firstly, a current demographic view purports that the worldwide population exceeds our available resources, and in order to restore the balance, there must be a decrease in the reproduction rate – accomplished very well by the promotion of C-Sections. Fact is, after you have one C-Section, all subsequent births will more than likely have to be by cesarean. Furthermore, the potential for complications from having too many C-Sections increases as doctors assert there is increased risk of uterine rupture. This scary fact often serves as a deterrent for women to become pregnant again, leading to the choice of permanent sterilization, which more often than not is performed during the C-section.

Secondly, the monetary gain from increasing surgical deliveries is astounding. Doctors and hospitals are earning staggering amounts of money from the torture of women through inductions, combined with unnecessary Cesarean sections. On average, a vaginal delivery costs $6000, less than half at a birthing center. On the other hand, a C-Section can run over $25,000 due to occurrence of complications as a result of surgery.

In addition to the profit earned, there are time factors involved in the increasing rate of C-section. Doctors and patients are electing to have the major surgery to coordinate with time restrictions, vacations, or other important events, but overlooking the devastating effects on mother and child. The time factor plays an important role in hospitals and doctor’s insistence on the controlled atmosphere of a C-section. An uninfluenced, drug-free vaginal delivery can take anywhere from 5 minutes to days. This unpredictability can interfere with hospital room turnover, surgical scheduling, doctor’s availability and other cost structures.

The gross misuse of a supposed ‘emergency procedure’ is destroying a very important aspect of our humanity. The Cesarean Section has been falsely made to appear as a simple procedure without too many complications. In addition to the maternal complications of bleeding and infection, a C-Section is without doubt still major abdominal surgery– which, in terms of surgery, is among the most dangerous types. In the end, the non-emergent use of C-Sections has far reaching social and physical implications that must be avoided at all cost.