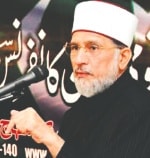 The respectable Canadian authorities must be made aware that a very dangerous hooligan is exploiting the international hospitality and rights granted by Canada. The person in mention is named Mohammed Tahir, who operates under the label “Tahir-ul-Qadri,” possibly adopting an alias of “Abdul Shakoor Qadri” according to news sources in order to establish his operations (under the organizational name of “Minhaj-ul-Quran”) in Canada.

It’s strange that his catapult to Zionist-friendly media fame has come out of nowhere and that they continually tout his book as “The strongest condemnation of terrorism…,” and “the only bold stand against terrorism,” which both the media and his organization claim. Notice how the aforementioned parties ignored all of the other Islamic scholars that not only produced thorough Islamic verdicts against terrorism (terrorist acts, suicide bombings, etc.), but—like the case of Mufti Sarfraz Naeemi, PhD (rahimahullah)—were murdered in cold blood for having taken a bold stand against the very same activities the book mentions.

M. Abdur Rashid Qadri of Toronto chaired a meeting wherein it resolved to approach the Canadian government to bar Mohammed “Tahir-ul-Qadri” from entering Canada, because he had planned to commit acts of terrorism, blackmail and violence, and planned to take over The National Assembly in Islamabad by using thousands of women, babies and elderly as human shields while in Pakistan. Furthermore, the committee would take legal action against him for bringing insults and a bad name to the Canadian people, since Tahir did all of this as a Canadian citizen who had openly violated his oath by which he was legally bound not to re-enter his former country, Pakistan, after seeking political asylum.

The Canadian authorities are urged to take heed of the warnings put forth against Tahir that have come from established professional sources. Psychiatrists in his native country of Pakistan have deemed him as “paranoid, with aggressive behavior,” an “egotist,” and “having delusions of grandeur.” Tahir’s justification for seeking asylum in Canada was because of supposed death threats against him, saying “People were out to kill me.”

The psychiatrists’ assertions are substantiated by Tahir’s original plans for “extreme action” in case his demands were not met. These “extreme actions” were to be aggressive occupations of government buildings and other such facilities by his followers—a lot of whom were women and children who were used as human-shields. The facist-style actions and pattern of immobilizing people to commit potentially large-scale crime reflects the same tactics of past leaders such as Adolf Hitler and Benito Mussolini, with his followers were brandishing pictures of him on their chests and their laps.

Canadians should be concerned as to why someone who has been spending millions of dollars daily promoting himself in Pakistan has been receiving welfare funding from the Canadian government—thus, their hard-earned tax dollars. Canada has been strategically reserved by Tahir-ul-Qadri as a ‘fallout shelter’, with Canadian citizenship being his shield against any reprisal from Pakistan; and—from the internationally observed drama he transacted—as a tactical operations center for his Minhaj-ul-Quran organization.