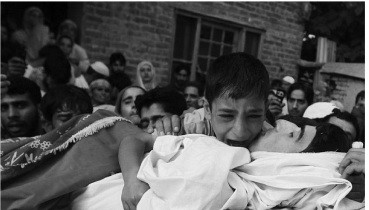 The 27th of October is being celebrated every year as the “Black Day” by every Pakistani and Kashmiri all over the world as a protest against the illegal Indian occupation of Kashmir, a day when India had forcibly taken over the land on October 27, 1947.

During the partition of the Sub-continent, like other princely states, the people of the state of Jammu and Kashmir (J&K), comprised of an overwhelming Muslim majority, decided to join Pakistan – according to the British-led formula. But Dogra Raja, Sir Hari Singh –a Hindu who was ruling over J&K in connivance with the Indian Prime Minister Jawaharlal Nehru and Lord Mountbatten, the then Governor General of India– joined India.

Kashmiris living both sides of the Line of Control observe Black Day each year on October 27 to protest against India’s occupation of Jammu and Kashmir. The day is marked with a total shutdown in Indian controlled Kashmir. On this very day, Pakistanis and Kashmiris across the globe express solidarity with the freedom fighters of Kashmiri people, demanding their legitimate right of self-determination from India which continues various forms of brutalities in order to suppress their popular movement.

The design to forcibly wrest Kashmir began to unfold on August 16, 1947, with the announcement of the Radcliffe Boundary Award. When the Award was announced, it did a great injustice by awarding the Gurdaspur District – a majority-Muslim area – to India, so as to provide a land route for the Indian armed forces to move into Kashmir.

There was a rebellion in the state forces, which revolted against the Maharaja and were joined by Pathan tribesmen who voluntarily joined the rebels. Lord Mountbatten decided to immediately send senior army and air force commanders to land in Srinagar.

When Pakistan responded militarily against the Indian aggression, on December 31, 1947, India made an appeal to the UN Security Council to intervene and a ceasefire ultimately came into effect on January 01, 1949, following UN resolutions calling for a plebiscite in Kashmir.

Notably, the Security Council adopted Resolution 47 (1948) of April 21 ,1948, which promised a plebiscite under UN auspices to enable the people of Jammu and Kashmir to determine whether they wished to join Pakistan or India. On February 5, 1964, India backed out of its promise of holding the plebiscite. Instead, in March 1965, the Indian Parliament passed a bill, declaring Kashmir a province of India-an integral part of the Indian union.

The very tragedy of Kashmiris had started after 1947, when they were denied their genuine right of self-determination. They organised themselves against the injustices of India and launched a war of liberation which New Delhi tried to suppress through various forms of brutalities.

Passing through various phases, during and after the partition, the struggle of Kashmiris – which has become an interaction between the Indian state terrorism led by the Indian security forces and war of liberation by the freedom fighters – keeps on going unabated.

Various forms of state terrorism have been part of a deliberate campaign by the Indian army against Muslim Kashmiris, especially since 1989. It has been manifested in brutal tactics such as crackdowns, curfews, illegal detentions, massacre, targeted killings, sieges, burning of houses, torture, disappearances, rape, breaking of legs, molestation of Muslim women and killing of persons through fake encounters.

According to a recent report on human rights violations in Indian Occupied Kashmir by the Indian Army and its paramilitary forces, there have been deaths of 93,274 innocent Kashmiris since 1989. Besides this alarming figure of open killings, there have been 6,969 custodial killings, 117,345 arrests, and the destruction and razing of 105,861 houses. The brutal Indian security forces have orphaned over 107, 351 children, widowed 22,728 women and gang raped 9,920 women. In June 2010 only, there have been 33 deaths including four children besides, molested eight women, torturing and injuring 572 people. Over the two decades of violence in Jammu and Kashmir, Human Rights Watch has called for the repeal of those laws which provide the armed forces with extraordinary powers to search, detain, and use lethal force, leading to numerous human rights violations. They also provide immunity for security forces; their prosecutions, even where the facts are well established, are rare.

Amnesty International has also pointed out grave human rights violations in the Indian-occupied Kashmir by indicating: “The Indian government’s disregard for human rights in Jammu and Kashmir means that in practice, people reportedly died in custody and that the whereabouts of the disappeared persons continue to be unknown…government forces continue to commit serious violations of humanitarian law…the Muslim majority population in the Kashmir Valley suffers from the repressive tactics of the security forces. Under the Jammu and Kashmir Disturbed Areas Act and the Armed Forces (Jammu and Kashmir) Special Powers Act and Public Safety Act, security forces personnel have extraordinary powers to shoot suspected lawbreakers, and to destroy structures suspected of harboring militants or arms.”

At present, Indian military and paramilitary troops are using all inhuman techniques of ethnic cleansing to disturb the majority population of the Kashmiris, which had been practised by the Serb forces on Bosnian and Kosovar Muslims.

It is of particular attention that in 2008, a rights group reported unmarked graves in 55 villages across the northern regions of Baramulla, Bandipore and Handwara. Then researchers and other groups reported finding thousands of single and mass graves without markers. In this regard, in the last few years, rights groups discovered nearly 3,000 unnamed graves in the various districts of Kashmir.

In this respect, in August, 2011, the Indian Jammu and Kashmir State Human Rights Commission (SHRC) officially acknowledged in its report that innocent civilians killed in the two-decade conflict have been buried in unmarked graves. The report indicated 2,156 unidentified bodies which were found in mass graves in various regions of Indian-held Kashmir. Notably, foreign sources and human rights organisations have disclosed that unnamed graves include those innocent persons killed by the Indian military and paramilitary troops in fake encounters, including those who were tortured to death by the Indian secret agency RAW.

Indian forces have intermittently been employing various patterns of military terrorism to maintain their alien rule on these occupied territories, but it seems that non-condemnation of these acts by the so-called US-led civilised international community has further encouraged New Delhi to continue its brutalities on the armless Kashmiri masses. Indian authorities are not willing to talk with Kashmiri people on political grounds as they have decided that only bullets are the right way of dealing with them.

But despite the employment of various forms of state terrorism in the Indian-held Kashmir, the war of liberation by the Kashmiri people will continue until they get their legitimate right of self-determination as recognised by the UN resolutions.

– Sajjad Shaukat writes on international affairs and is author of the book: US vs Islamic Militants, Invisible Balance of Power: Dangerous Shift in International Relations