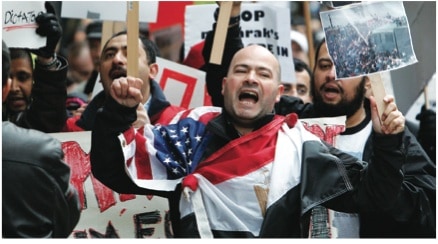 Just a couple of short weeks ago very few Americans knew the name Hosni Mubarak. Indeed Mr. Mubarak could have walked the streets with anonymity in my hometown of St. Louis, caught a movie, and went out to dinner and would not have been recognized.

Today that is no longer the case as coverage on Egypt is in the media 24/7. At first the coverage of the protests was almost exclusively positive. As Americans we pride ourselves on being a nation that stands for liberty and democratic values. People sympathized with the young people in Tahrir Square even if they were not sure why the people had taken to the streets.

Given the technology of the internet, independent journalists, activists, and grassroots organizations in totalitarian societies in the Muslim World,  have been able to create narratives that have exposed the regimes and made up for the failure of Western media and the propaganda of state-owned media.

The routine torture and violent assaults committed by the Mubarak security apparatus, the blatant corruption, nepotism, the persecution of observant Muslims, and the outlaw of any real political opposition was now increasingly being exposed. Examples of this include the ‘We are all Khalid Said” Campaign highlighting the case of the death of a young man in police custody.  Along with this, many international organizations, including the Muslim American Society in America under the leadership of Imam Mahdi Bray, led a campaign highlighting the detention of thousands of political prisoners in Egypt.

The coverage in the media began to intensify after the thugs of the Mubarak regime unleashed their sadistic assault on the peaceful protesters on live television. Pro-Mubarak forces on horses and camels charged into the crowd of freedom activists with whips, and this was followed by a barrage of sticks, stones, Molotov cocktails, and bullets. Journalists who had been covering the event also faced kidnapping and beatings. In America, we saw the assault on Anderson Cooper of CNN by Mubarak thugs on televisio

The sheer horror of what happened on live television, (reminiscent of the Gang street-fighting from the Civil War era Bowery district of Manhattan, New York), turned most Americans adamantly against Mubarak. It also forced the hand of the Obama Administration to call for a ‘transitional government and free, democratic elections.’

Around this time there also began to surface a Pro-Mubarak crowd in the American media particularly on the right-wing. In this Pro-Mubarak crowd there have emerged three camps. The first camp is the ‘foreign policy realists” who support stability and the protection of American interests beyond anything. This camp included the likes of Henry Kissinger and James Baker. The second camp is the Pro-Israel crowd represented by Charles Krauthammer, Richard Perle, Mort Zuckerman, and Christian Zionists such as Mike Huckabee.

The third crowd is perhaps the largest. This crowd is also fueled by stability and a love of Israel; but is also fueled by Islamophobia. Chief amongst these are Glenn Beck and Sean Hannity on FOX News who have used the events in Egypt to promote their agenda. To them, and those they have interviewed on their shows from an array of anti-Muslim groups, the events in Egypt are the beginning of the creation of a new Islamic Caliphate and the death of the West.

The chief bogeyman they have created is the Muslim Brotherhood whom they see as automatically taking power in  Egypt once Mubarak and his military dictatorship exit. To[a] do this, the media spread  sensational lies; lies such as create fear and hostilities with America and the West.

The fact of the matter is that if Egypt holds free and fair elections, the Brotherhood should do fairly well, but it will just be one of many political parties working within a new system and competing in the marketplace of ideas. It should also be noted that the Brotherhood has not been connected to any acts of violence in Egypt in more than half a century and has worked to establish a health and social service network while educating the society on religious matters. In an era of secularism and materialism when the intellectual classes have shunned religion, the Brotherhood has sought to be a caller to Islamic values.

Internally, within the American-Muslim community, most have been supportive of the Egyptian Revolution, even if silent. Already under tense scrutiny by federal law-enforcement and Islamophobic media outlets, many Muslim organizations in America are afraid to publicly take a position while being privately supportive of those who struggle in Egypt.  The leaders, who line up at the public trough for money and have no other real mission but to cozy up to those in power to gain money and status in this society, are waiting on the ‘accepted opinion” before coming out publicly.

However, there are those who have come out strongly for those brothers and sisters in the streets of Egypt fighting for a better future. Imam Zaid Shakir wrote a letter in passionate support of the demonstrators. Imam Suhaib Webb gave eloquent prose on the situation as did Sheikh Yaseer Birjas.  Ibrahim Ramey spoke to the concerns of the protesters to media outlets. Khatibs such as Imam Badi Ali dedicated their khutbas to the subject. Grassroots mosques throughout America and campus Muslim organizations rallied to the defense of the Egyptian Revolution;Facebook groups were formed and Muslim activists circulated YouTube videos.

Indeed it was very difficult to find any group of Muslims in America with a kind word towards the Egyptian Dictator- with one exception.

The Madkhali group, a sub-group within the Salafi Dawah movement in control of most of the African-American Salafi masjids, became defenders of Mubarak. This is done because they are under the influence of Gulf-based scholars who take a hardcore Pro-Saudi line, and they hold not revolting and remaining submission to rulers, no matter how oppressive and corrupt, as being an element of following the Sunnah. Anyone who stands for justice, ends corruption, and condones the free practice of Islam is seen as a deviant. Yet they display many elements of hypocrisy from within this position resulting in the of launch  brutal verbal attacks on any brother who shaves or trims his beard, practices bida’a (innovation) or follows a madhab (accepted school of thought within Islamic Law).  Yet, Hosni Mubarak shaves and is openly irreligious; it seems that becoming a ruler is the criterion for rape and murder, without a word of protest from these defenders. Shadeed Muhammad was made out to be a corrupt caller to sin because he took his wife to the movies. A full campaign was dedicated to him being ‘put off the minhaj’. Yet Mubarak has funded movie studios and a variety of un-Islamic institutions.

Secondly, as most of these Madkhalis in America are African-American, I find it odd that they would be opposed to those in the streets fighting for freedom. The Civil Rights of African-Americans were won by such social and political agitation–from the abolitionism of Frederick Douglass and John Brown, to the NAACP and the likes of W.E.B. Du Bois and Thurgood Marshall, to the movement led by Martin Luther King, and to the more aggressive resistance of the likes of the Black Panther Party, Malcolm X and Stokely Carmichael.

If ‘revolting against the rulers” is unethical and against the deen (way of life)  how many of these brothers are willing to go back to the back of the bus – ready to openly face housing discrimination – to be told they cannot have a job because of the color of their skin?

They are enjoying the fruits of that movement for social justice in America, yet would deny such a movement for the people of Egypt under the guise of their loyalty to the Saudi throne and its cohorts.

The majority of the Muslims remain, whether silent or loud, with the people of Egypt, against tyranny. In cities across America, there have been rallies supporting the call to freedom. May Allah bless all of those who have joined in this call as we all remember that this ummah is one; what troubles my brother in Cairo, Jakarta, or London should trouble the Muslims inAmerica.