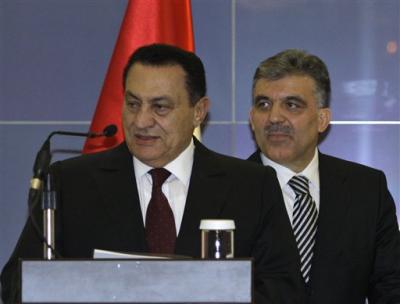 After the recent meeting between Turkish President Abdullah Gul and his Egyptian counterpart Hosni Mubarak, the Turkish leader expressed his view that the two countries were key in solving the problem of Palestine.“Turkey and Egypt are two important countries in the Mediterranean as well as the Islamic world,” he said during a press conference that followed the meeting, further stating that the cause of Palestine is a priority for both countries.

Much of the Egyptian public views its government poorly as regards Palestine, and many see Mubarak as playing to American desires. But American student Hassan Ali, who current lives and studies in Egypt, is more enthusiastic about the regions prospects. “I’m optimistic and happy to see two regional powers getting together to attempt to resolve the long-standing Palestinian conflict,” he said.

The Turkish president was also upbeat. “We discussed specifically the Middle East peace process. We have been watching very closely Egypt’s extensive efforts to that end, and our cooperation on the Middle East issue will continue,” Gul said. Mubarak said that both countries view current Israeli attitudes as posing “a danger” to peace.