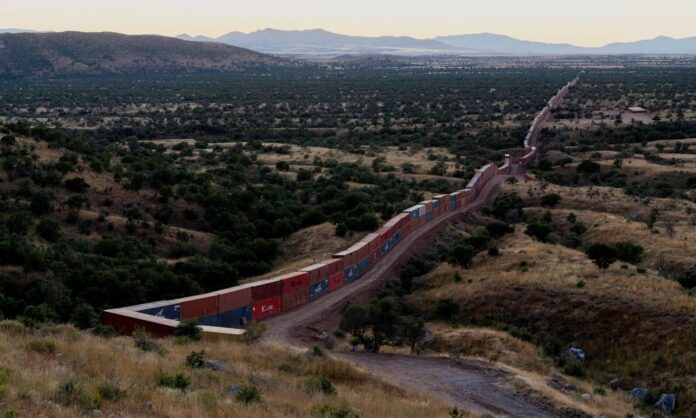 Federal authorities won’t act, but they are sympathetic, the sheriff said: “They’re feeding me information.”

Hathaway’s county sits directly west of Cochise County, where Ducey has been dropping containers for the past month and a half despite federal officials repeatedly telling him that his actions are unauthorized and unlawful. With federal authorities doing nothing to act on those warnings, Hathaway has vowed to arrest the governor’s contractors if they cross the county line into his turf.

That scenario would be unlikely, as the contract for the project has the governor’s wall stopping just shy of Hathaway’s jurisdiction. Convoys of Ducey’s contractors have, however, been racing through communities in Santa Cruz County for weeks now, hauling 40-foot shipping containers behind multi-ton pickup trucks at dangerous speeds. Hathaway said his department has received complaints from residents in the town of Elgin of Ducey’s drivers “barreling through town,” ignoring stop signs, and “flying past children.”

“I’ve advised my deputies to especially scrutinize that area looking for speed violations, reckless endangerment, reckless driving,” Hathaway told The Intercept in an interview  — though, the sheriff argued, the real solution lies with the federal authorities paid to protect the public lands where the governor’s lawbreaking is taking place. The process wouldn’t be complicated. As a former Drug Enforcement Administration investigator, Hathaway sketched out a response the feds often take when targeting ongoing organized criminal activity.

“The way you would end this right away is you go get a seizure sticker, and you slap it on the side of one of those $200,000 trackhoes and say, ‘I’m seizing this because it’s being used to facilitate illegal activity,’” he said. “Or seize one of those F350 pickup trucks that’s pulling the flatbed trailers and say, ‘This vehicle is being used for illegal dumping on federal lands.’” Hathaway predicted Ducey’s work crews would “scatter like flies”: “That’s the way to really hit ’em where it hurts.”

“I wouldn’t be surprised if they all just packed up and left right then,” Hathaway said. “That’s what the Forest Service should be doing. They have the ability to seize vehicles that are being involved in illegal activity, illegal hunting, illegal whatever, and yet, nobody’s doing that.”

Since declaring in an interview with the Nogales International that he would arrest Ducey’s contractors — becoming the first, and to date only, law enforcement official in the country to raise the specter of consequences for the governor’s actions — Hathaway, a Democrat elected in 2020, said he’s had Forest Service officials quietly sending him updates on the container wall and expressing their gratitude for taking a stand.

“Surprisingly, Coronado National Forest, their police are very excited about what I’m doing. They’re very much on my side, and they’re feeding me information,” he said. For the sheriff, it’s a bizarre situation. “I feel like being kind of sarcastic back to them and saying, ‘You know, this is really your job. I mean this is on federal land. Why are you just waiting for a county sheriff who’s county starts six miles down the road?’”

The governor dismissed 115 years of legal agreement that a 60-foot strip of border road known as the “Roosevelt Reservation” belongs to the federal government — and said the state actually had jurisdiction over the land. Ducey contended that this mistake, combined with a state of emergency he declared because Arizona is purportedly beset by a foreign invasion, meant that he could disregard all of the time-consuming processes involved with following federal law when initiating construction on public lands.

Since filing the suit, Ducey has laid nearly four miles of shipping containers through the Coronado National Forest in Cochise County. The work by the Florida-based contractor AshBritt, which has deep ties to the Republican Party, is causing extensive environmental damage, blocking a critical migration corridor for jaguars and ocelots — both protected under the Endangered Species Act — and marring a once-serene desert landscape with a wall of giant metal boxes topped with concertina wire.

The sheriff in Cochise County is Mark Dannels, a close ally of the governor who frequently appears on Fox News to describe his county as engulfed in chaos and disorder. In February, the Arizona Department of Emergency and Military Affairs, the state agency managing Ducey’s border wall, committed to providing Dannels’s department with $14.9 million to thwart the purported invasion. As a county sheriff, Dannels has no authority to enforce federal immigration law.

Filing a lawsuit to preemptively declare an illegal activity is in fact legal does not make it so, Hathaway said. “What if they were out there without hunting licenses, just shooting a whole bunch of people, and then saying, ‘Well, we’re filing a lawsuit and so you can’t stop us from doing this, even though it’s clearly a violation of federal law?’” he asked. What’s more, the sheriff argued, such a lawsuit certainly shouldn’t handcuff an agency like the Forest Service from executing one of its core missions. “If they witness a clear crime,” he said, “that’s a clear crime.”

While the Department of Justice has filed a motion to dismiss Ducey’s lawsuit, the Biden administration has taken no steps on the ground to stop the governor’s project.

If a normal person ventured onto national forest land and dumped a bag of trash on the ground in front of a ranger, they would be issued a citation, Hathaway said. In the case of Coronado, the situation is much more severe, with no repercussions. “You’re talking about hundreds of tons of material being dumped out there and a lot of earth-moving — heavy-tracked vehicles moving large amounts of earth. And this is all on federal land,” Hathaway said. “This is not state land. This is not private land. It’s been declared illegal.”

On Dec. 7, Hathaway made an unannounced, solo visit to offer his support to a small group of local residents and protesters who are camped out at the site of Ducey’s container wall construction. So far, the citizen public land defenders have been the only force to impede the governor’s destructive march through the national forest — and they have been remarkably successful, bringing the project largely to a halt over the past week.

Hathaway was taken with their efforts and wanted to say so. During his visit, the sheriff heard about the handful of people who had stood in front of the governor’s vehicles for hours in the cold, stopping their advance the previous night. “Man, fantastic what the protesters are doing,” he said to himself. The sheriff described the protesters as “very valiant” and likened their willingness to block heavy equipment to “a Tiananmen Square-type situation.”

For Hathaway, the area surrounding the protesters’ camp is imbued with deep personal meaning. “I’ve been going out there since I was a baby,” Hathaway said. The sheriff and his family have ranchland in the area. He’s ridden horseback along the border road where Ducey’s trucks are running for as long as he can remember. “That’s been most of my life out there, right where the protesters are,” he said. “I know that whole area in and out like the back of my hand, and it’s always been peaceful and serene and quiet.”

While he had been to the site of Ducey’s container wall more times than he could count, Hathaway’s Wednesday visit was the first time he’d seen the landscape bisected with a jagged ribbon of metal boxes. His reaction was visceral: “This is disgusting and ugly.”

Historic Resolution on the 75th Anniversary of the Nakba: The United Nations Says Israel Committed Genocide

Lula Sworn in as Brazil’s President, Vows to Return Progress