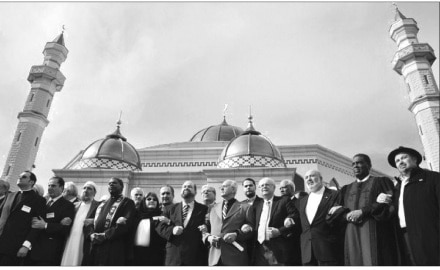 A Message of Tolerance and Love Unite Abrahamic Faiths

(IP) – Over the last decade or so, the term ‘Islamophobia’ has spread across the Western world; polluting the minds of many.

The rate of anti Muslim groups in the US has tripled from 10 in 2010 to 30 in 2011 and there have been over 800 incidents of violence, vandalism and arson against people believed to be Muslim, Arab or South Asian since September 11, 2001.

Approximately 43 percent pf Muslim Americans [56 percent – under the age of 30] reported experiencing a form of physical, verbal or institutional Islamophobia (2010-2011), as reported by The Muslim News.

This year’s Blessed month of Ramadan saw one of the largest spikes in Islamophobic incidents in the US in a decade. Many of which were committed by those whom identify themselves as Christians. However, many Christians have spoken up against these unlike Christian acts – saying they are fed up with Islamophobia despite the growth of hate mongers. The New Republic reports that within the past month, four separate campaigns have started to push back against extreme Christian voices and to preach a message of tolerance and love.

According to The New Republican, Sojourners, a community founded organization led by evangelical author and speaker Jim Wallis—responded to subway ads calling Muslims “savages” by purchasing space to post its own posters in the same subway stations. The message is simple: “Love Your Muslim Neighbors.” After the mosque attacks in Joplin and Toledo, Sojourners bought billboards in both communities to broadcast the same message. “It’s only an extremist fringe that would ever attack another religion’s place of worship in this country,” explained Sojourners spokesman Tim King to the Christian Post. “But unless we offer up an alternative voice, it will be the message and acts of extremists that most across the country and the world hear.”

Despite the latter endeavors of mischief, Allah has shown that verily He is in control by bringing people of the Abrahamic faiths together.

Pamela Geller is recognized as being at the core of a group promoting intolerance of Muslims and Arabs in America. The Southern Poverty Law Center, a group that monitors the hate movement in the United States, calls her “the anti-Islam movement’s most visible and flamboyant figurehead.”

Geller’s subway ads also prompted a response from an interfaith coalition called Shoulder-to-Shoulder. The group worked closely with the United Methodist Women to produce a letter signed by 168 Washington-area clergy and religious organizations calling on the Washington Metropolitan Area Transit Authority to donate any proceeds from Geller’s ads to charity. It also countered with its own Metro advertisement: “Hate speech is not civilized. Support peace in word and deed.”

Two other religious campaigns are focused on educating Americans—and particularly Christian communities—about Muslims and Islam. On October 11, the Interfaith Alliance led by Baptist minister Welton Gaddy, along with the Religious Freedom Education Project of the First Amendment Center, released a guide called “What is the Truth about American Muslims? Questions and Answers.” The online document addresses topics such as the role of mosques in Muslim life, whether U.S. courts can ever substitute religious law for civil law, and the meaning of Muslim words like “jihad” and “Taqiyya.”

In mid-October, the University of Wisconsin-Madison hosted a series of lectures, performances, and discussions called Understanding Islamophobia in America. Sponsored by the Muslim Students Association, in conjunction with the Lubar Institute for the Study of the Abrahamic Religions and the Muslim-Jewish Volunteer Initiative. The aim of ‘Understanding Islamophobia in America’ was to counter negative stereotypes of Islam and Muslims, and to celebrate the accomplishments and contributions of the Muslim community in the United States,” says Siddique Akram, president of the Muslim Students Association.

Efforts such as these that promote acts of interfaith and unity, that build bridges and close the gaps between the religions are often ignored by the media. The evil antics of Geller and Jones will make the front pages, while the efforts of Christians to push back against them will remain mostly exiled to the religion pages.