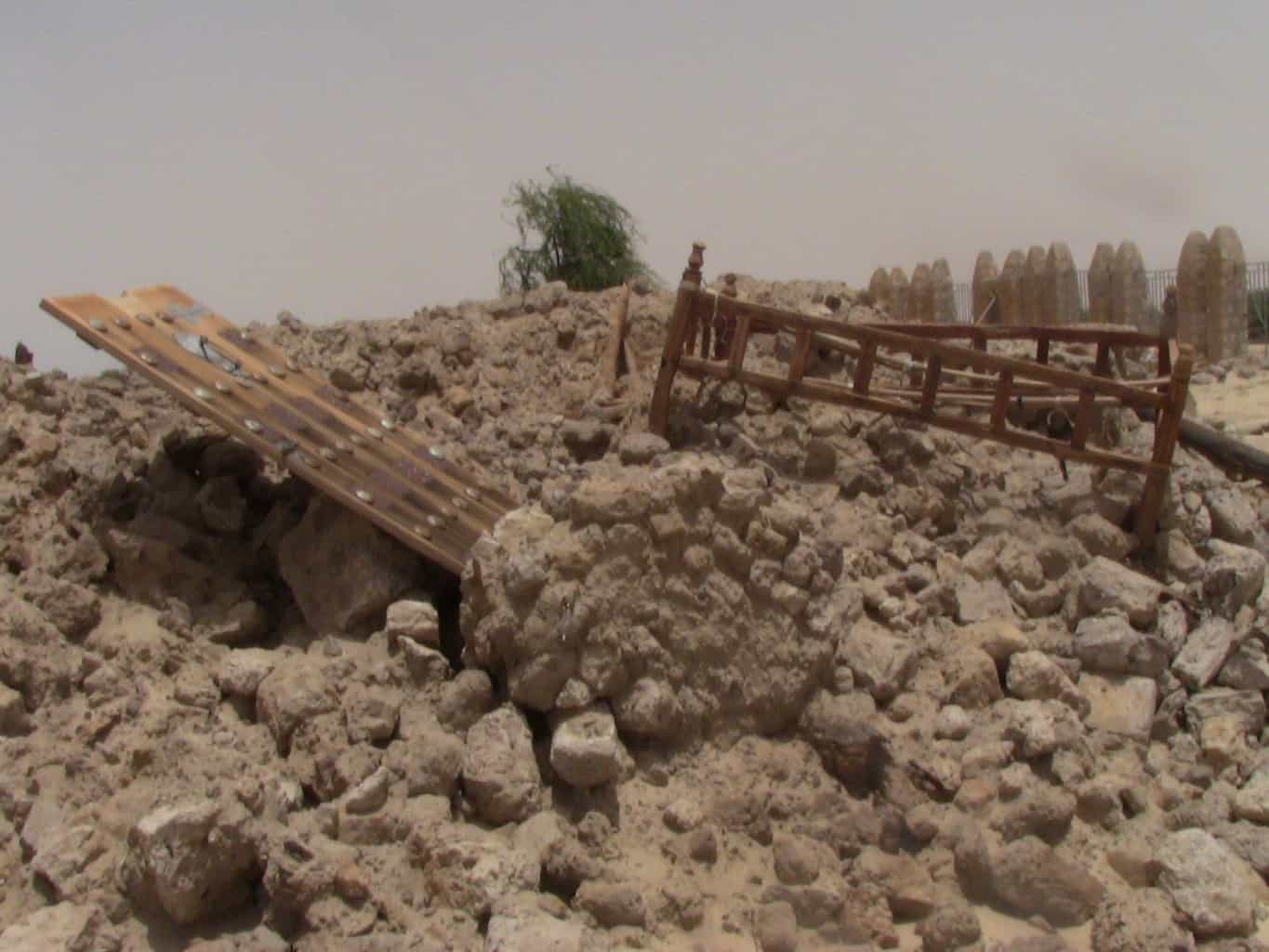 July 1, 2012, will remain a sad day for Mali, the Islamic world and humanity as a whole. On this day, centuries-old Sufi shrines and mosques of the ancient city of Timbuktu, known as the "City of 333 Saints", began to be systematically demolished by Wahhabi extremists who are wrongly portrayed as Muslims – or hard-line Sunnis – although their actions and beliefs have nothing to do with Islam.


July 1, 2012, will remain a sad day for Mali, the Islamic world and humanity as a whole. On this day, centuries-old Sufi shrines and mosques of the ancient city of Timbuktu, known as the "City of 333 Saints", began to be systematically demolished by Wahabi extremists who are wrongly portrayed as Muslims – or hard-line Sunnis – although their actions and beliefs have nothing to do with Islam.

The extremists ordered residents to leave, then started razing the tombs, witnesses said. "They were shooting in the air to warn people of going near and entering the area," local resident Allimam Oumar said of the attacks.

Some of the destroyed sites, like the shrines of Sidi Mahmoud Ben Amar, Alfa Moya Lamtouni and Cheikh Sidi El Mokhtar Ben Sidi Mohammed, as well as the main gate of the Sidi Yahya mosque, had been added to the UNESCO World Heritage registry in 1988.
It is reported that since the destroying of the sites, Timbuktu residents have formed armed brigades to protect remaining holy places.
"Today, we have a vigilance brigade so that no one touches the mausoleums of Araouane and Gasser-Cheick (in the city of Timbuktu)… We are armed and there is the required number of people," said Tahel Ould Sidi, leader of the brigade, to AFP. "We are not going to allow people who know nothing about Islam to come and destroy our treasures. I studied in Mauritania and Saudi Arabia, no one tells us in the Holy Quran that we should destroy tombs," he added. Destructive of Islamic heritage, Wahabi doctrine holds that the preservation of sacred monuments and tombs in reverence and respect is a dilution of Islamic monotheism and a prohibited form of idol worship. Setting the example, the Saudi Arabian government, the founders and promoters of Wahabism worldwide, have destroyed all the ancient homes and historical monuments associated with the Holy Last Messenger Muhammad, peace be upon him, the blessed members of his household and holy companions, blessings be upon them.

Only the most holy tomb of the Holy Last Messenger, peace be upon him, remains intact in Medina for fear of an overwhelming outcry from the Muslim world that would serve to expel the Saudis from ruling the holy land. In addition, a great deal of money remains to be had from pilgrims who travel to Medina and to Makkah, where the Holy Ka'aba remains situated since originally constructed by the Holy Messenger Abraham, peace be upon him.
The events occurring in the north of Mali stand as a reminder of the many crimes the followers of Wahabi ideology have committed throughout the world. Always under the false pretence of fighting idolatry, they will go to any degree to push their extreme views.

In April 2011, during the annual festival at a large Sufi shrine in southern Punjab in Pakistan, two suicide bombers set off an explosion killing more than 40 worshippers and injuring hundreds more.

Again in April 2011, in the Egyptian town of Qalyoub, armed with crowbars and sledgehammers, two dozen salafi fanatics arrived at the Sidi Abdel Rahman shrine in the middle of the night aiming to smash it to pieces. Five other shirnes in Qalyoub were destroyed soon after Hosni Mubarak's fall from power. Following these events, the head of al-Azhar, Sheikh Ahmed El-Tayyib, has called for efforts to confront hardline extremist doctrine.

In January of this year, following the fall of Muammar Gaddafi, extremists bulldozed their way into a Benghazi cemetery and carted off the remains of 29 respected sages and scholars to dump elsewhere. When militants threatened Libya's biggest shrine at Zlitan in March, armed volunteers rushed there in pick-up trucks mounted with weapons to defend it.


“From the time of their inception, the Wahabis have waged war against Muslims, particularly targeting the descendants of Holy Last Messenger, peace and blessings be upon him," says International Qur'anic Open University Chief Executive, the Honorable Dr. Khalifa Hussein Adams. "Wahabism is an independent religion that was founded by Ibn Abdul Wahhab and supported by the British in order to occupy the Holy land. Thus, the term ‘Wahabi Islam’ is absolutely wrong….Wahabism does not recognize Islam and Muslims their co-religious counterparts."


Extremism, terrorism and fanaticism against Muslims reigns in Wahabi ideology; this same spirit served to massacre a half million Muslims in the bloody takeover of Arabia. The Honorable Dr. Adams continues: In the sacking of Taif, the Wahabis “killed every woman, man and child they saw, slashing with their swords even babies in cradles. The streets were flooded with blood. Citizens who surrendered in their houses were executed, their bodies trampled by horses and left unburied. Their homes were looted and their possessions scattered, later to be washed away by rain. The Wahabis then set about destroying all the holy tombs and burial grounds in the city, followed by the mosques and Islamic schools, or madrassas. They destroyed the tombs of the grandson of Prophet Mohammad (peace and blessings of Allah be upon him) Hazrat Imam Hussain, may Allah be pleased with him."


A Sign of the Last Days?
On July 2, the extremists destroyed the gate of the Sidi Yahya Mosque, named for one of the first imams of Timbuktu. Using rifle butts, picks, and shovels, they bashed in the entrance of the mosque. It is said by local residents that the long-sealed doorway, which has been closed for centuries, would not be opened until the last days of the world.


The extremists, in their fanaticism, said they wanted to prove to the people that this was a false sign and that the world would not end. But in fact, in their ignorance, their action became a proof of the veracity of the saying on the opening of the Sidi Yahya mosque main door.
As has been mentioned many times by the Vice Chancellor of the International Qur’anic Open University, El-Sheikh Syed Mubarik Ali Shah Gilani, and by many other scholars,  we are at the end of time. The signs of the last days mentioned by the Holy Last Messenger (peace be upon him) have already occurred.


Since the month of August 2010, in Holy Islamberg, New York, Allah’s Name has been shining. According to His Eminence El Sheikh Gilani, this is a sign for humanity and the last warning for the rejecters of truth.


The opening of the Sidi Yahya masjid main door is said by locals to be a proof, as well.
Declaration:
Not a single Muslim has been found destroying churches, synagogues, mosques and monuments in which the name of God is commemorated, nor are Muslims to be found committing suicide bombings and killing innocent people.


The public must know that the people committing crimes of violence in the name of Islam seek to create Islamophobia in the West and elsewhere in the world and to propagate the evil from their gospel written by their own prophet Ibn Abdul Wahhab, a dupe of the British secret service.


Wherever the peaceful culture of Islam remains, Wahabis envision their religion dominating and do not shrink from terrorism to achieve their goals. Such crimes are not and have been committed not by Muslims, but by enemies of Islam. Knowledge of past and present events make apparent the reality and truth. The Holy Shrine of Sidi Ben Amar. One of several cemeteries protected under UNESCO World Heritage has been reduced to rubble.