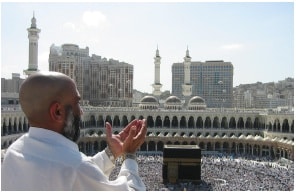 Turn on any television or open any newspaper and you can’t help but notice the escalating Islamophobia that exists in America and abroad. Cleverly disguised as campaigns against terrorism, the various media outlets broadcast this manufactured fear around the world.

Turn on any television or open any newspaper and you can’t help but notice the escalating Islamophobia that exists in America and abroad. Cleverly disguised as campaigns against terrorism, the various media outlets broadcast this manufactured fear around the world. The agencies that have fashioned this paranoia due to extreme hate for Islam, are relishing in the violence and mayhem that is occurring for it seemingly supports the negative, preconceived notions that exist about the faith and thus supports their efforts. What people aren’t seeing is that most of this carnage is rooted more in culture than it is religion and this is why we at the Islamic Post are dedicated to being that one media source that sets the record straight about true Islam so that its beauty will shine like a beacon of light for all humanity and thus serving its true purpose. In a previous article it was mentioned that there are two aspects of Islam, an essence and a form, and each aspect was associated with its own type of Muslim (i.e. there are two separate, major types). But after reading the following passages from the book Irshad it dawned on me that this view is incorrect and the appropriate view will allow people to see true Islam.

The complete title of the book is Irshad : The Wisdom of a Sufi Master and the passage is as follows: “There are self righteous fanatics who abstain from eating pork, but not from devouring human rights; who call it unlawful to eat blood, yet kill human beings; who talk of wine as forbidden, yet consume the property of orphans; who stress the unlawfulness of adultery, yet indulge in slander. It is quite correct to say that Allah AWJ forbids the eating of pork, but it is also unlawful to devour human rights. Indeed, the latter is a greater sin.” In another passage the author says—and I am paraphrasing: God had indeed forbidden adultery and fornication, but The Holy Last Messenger Muhammad (peace and blessings be upon him) has told us that lying and backbiting are even worse than those dreadful sins. As for sloth, there is no one more odious to God and The Holy Last Messenger (peace and blessings be upon him) than a lazy person. Those unbelievers also include employers who exploit their workers and people who eat in front of others without sharing their food. The Pilgrimage should be made for the sake of God, not merely to acquire the title Hajji. Do not break a human heart. Though you construct a hundred thousand Ka’bas, if you break one heart you are ruined. The Ka’ba in Mecca was built by the blessed Abraham, but God created the heart. The first state of purity is that required for the ritual prayer; if broken it can be easily restored by ablution. The second is the purity of faith. It is broken if one lies, slanders, hits, slaps, beats, commits murder, or violates the other prohibitions of God; nor is it such an easy matter to restore the purity of faith.

These few simple passages say so much about Islam for those who truly want to know about the faith. Islam is complete and total submission to the will of God and a Muslim is one who does that. Submission is of one type, you do it or you don’t, therefore God is one, Submission is one, Islam is one, and there is only one kind of Muslim.

This means that although Islam has two aspects (i.e. essence and form) it is the complete marriage of these ideas that one inculcates to be a Muslim. Consequently these parts are not mutually exclusive so if one practices Islam with the idea they can separate the two attributes then in essence they are not Muslim. So even if they have made the testimony of the faith (i.e. taken “shahada”), they cannot truly believe only profess that they do. In the end there is only ONE type of Muslim and all the others who profess to be are merely people who have shahada.

Thus those images you see on television of people usurping human rights, oppressing women and children, and murdering innocent people in the name Islam, are repulsive to Muslims and can only be committed by people who propagate their own desires and merely profess to believe in God. If one is a true believer, they will put into practice their beliefs, the mere professors stop at only the words.

Subsequently Islam is more than a set of religious rites and rituals; it is a broader idea of how one is to conduct their life to realize a unity with God. This means that it is not necessary for one to take the testimony of faith by mere words in order to be a Muslim. If you truly follow the example of Christ (i.e. true Christians), Moses (i.e. true Jews), or The Holy Last Messenger (peace be on them all) in letter and deed, then you are in fact a believer.

Consequently people can be coerced into speaking the testimony, but what is the good in that if in your heart you don’t believe? From this one can then see that it cannot be the goal of a Muslim to force anyone into Islam, we can relay the message and hope ones heart points them to God. In this sense the more true believers there are, the better we can all get along and truly live peacefully on Earth as the family of God. And as always, Only by God, the Almighty and All Glorious, can we be healed.