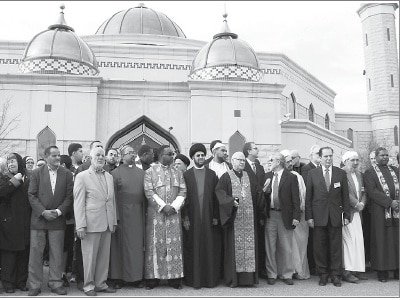 Dearborn –Amidst the backdrop of a media frenzy that once again had Terry Jones at its core, Muslims and Christians stood united in support of one another in an incredibly demonstrable stance against the evil plot to cause dissension between Islam and Christianity. Immediately upon hearing that Mr. Jones planned a protest against religious principles, members of the United Muslim-Christian Forum travelled to Michigan from several states to ensure that the bonds between Muslims and Christians remained unbroken. Many UMCF members were on site and met with clergy, residents and local business owners in an effort to quell the potential clash that the homegrown terrorist, Terry Jones, attempted to create.

Mr. Jones’ satanic agenda included a protest in front of The Islamic Center of America, known as the nation’s largest mosque. His plans to rally against ‘Sharia’ and his version of ‘Jihad’ fell flat, as the city’s officials – including Dearborn Mayor John B. O’Reilly Jr., would not issue a permit for him to protest in the area. He even managed to alarm local Christian clergy as they voiced concerns that his demonstration would block traffic and limit access to their Good Friday services. His abhorrent plan quickly boomeranged when he spent time in a local jail and refused to pay the $1.00 bond for his release.

With a congregation in Florida of less than 40 parishioners, Mr. Jones managed to incite riots recently in Afghanistan after he cowardly burned a copy of the Holy Qur’an inside his church. After images of this sacrilege were seen in Afghanistan, calls for retribution began and many people were killed.

Recently in the news, a no-brained copy-cat by the name of Ann Barnhardt brazenly broadcasted a video of her placing pieces of bacon strips inside the Holy Qur’an and then burned it claiming that “it cooks real good”. As a result, the surrounding area was engulfed in a hurricane that has caused several hundred thousand dollars in damage. The results of this infraction against the Almighty Creator have left the area still picking up the debris to this day.

It has been made quite clear that Almighty God will protect HIS book without delay and the repercussion for disrespecting this book is everlasting damnation.  This is not at all a threat, but a reality and a warning.

Muslims and Christians did not raise a hand of violence towards Mr. Jones, nevertheless, he was debased in front of the entire world and will continue to be debased each time he attempts to disrespect Almighty God’s Word.

Those who call themselves Muslim yet promulgate terrorism against true Islam, such as the Shiites, are in grave danger of being on the receiving end of the displeasure of ALLAH, The Glorified and Exalted, as well.  This group rejects the established Khalifate, the hierarchy of Muslim leadership founded in Islamic Law, and mocks the Sunnah of our Beloved Prophet Muhammad ( peace be upon him), his blessed conduct and instruction which every Muslim is bound to obey and emulate, by not adhering to many of his established laws.  Wailing and self-mutilation in the name of Hazrat Imam Hussein, God’s Mercy be upon him, is completely unacceptable and has been used as a means of profit.  Their grand Masjids covet congregations of people who do not even make Namaaz ( the five daily obligatory prayers) as the Holy Nabi, peace be upon him, has prescribed, and Almighty God has commanded.  In recent events in Bahrain, an attempted Shia uprising left many people murdered in the streets, thereby further destroying the stability of the worldwide Muslim Ummah (united family in faith), and adding fuel to the raging fire of those who wish to stamp out Islam.

The world must recognize true Islam as was propagated by the Holy Nabi, the Blessed Last Messenger of Almighty God, Muhammad, peace be upon him; not the innovations and opinions of those who came well after him.

The fact remains that Muslims and Christians must unite in order to preserve true faith and belief in the One Almighty Creator, as the plan to tear these sister faiths apart is ever looming. American Muslims and Christians stand together outside of the Islamic Center of America in Dearborn, Michigan, to protest the vile ignorance of self-dubbed Reverend, Terry Jones.