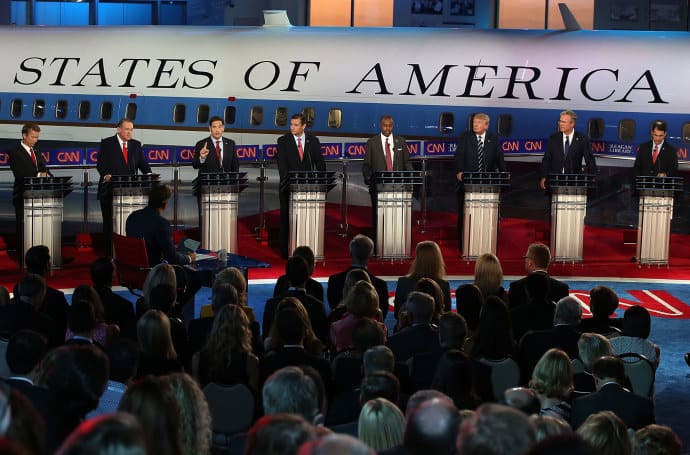 They slam Obama because he won’t say “radical Islam.” But why won’t the Republicans acknowledge radical white terrorists?

“I want surveillance of certain mosques,” bellowed Donald Trump to his followers at a campaign rally in Birmingham, Alabama. Ted Cruz recently declared that it would be “lunacy” to allow Muslim refugees into the United States because they “could be jihadists coming here to kill Americans.” And in the aftermath of the Paris attacks, Marco Rubio exclaimed that in order to keep Americans safe, we need to be vigilant in our war against “radical Islam.”

The threat posed by ISIS is real and must be forcefully addressed. But if these Republicans truly want to keep us safe, why don’t they ever raise the issue of right-wing terrorists?

Here are a just a few recent incidents of terror from the right:

1. Two white supremacists were just arrested for plotting a terrorist attack to bomb black churches and synagogues in Virginia. As law enforcement noted, these men were planning to shoot and bomb the “occupants of black churches and Jewish synagogues” in accordance with their “extremist beliefs.”

2. Glendon Scott Crawford, a self-professed Klan member, was convicted in August for plotting a terrorist attack involving a weapon of mass destruction that would emit radiation in lethal doses. Crawford, who will be sentenced in December to 25 years to life, was planning to slaughter Muslim Americans in upstate New York.

3. Craig Tanber, a white supremacist was arrested in September in the murder of Iranian-American Shayan Mazroei in California. Tanber’s girlfriend had reportedly called Mazroei a “terrorist” and said “f* Iranians” before her boyfriend stabbed the 22-year-old Iranian American to death outside a pub in Irvine, California.

4. The criminal trial of Robert Doggart, a Christian minister, will begin in Tennessee next January in connection with his plans to slaughter Muslim Americans in New York. His plot, which was thwarted by the FBI, involved working with far right-wing militia group members and using M-4 assault rifles, armor-piercing ammunition and even machetes to cut the Muslims “to shreds.”

And, of course, the most revolting terror attack from the right involved the case of Dylann Roof, the white supremacist who in June murdered nine African Americans in a Charleston, South Carolina, church in hopes of sparking a race war. Roof, like ISIS, was using violence to accomplish his political goals.

There are 784 active white supremacist groups in the United States per the Southern Poverty Law Center (SPLC.) They have radicalized people to commit violent crimes in recent years, such as the six Sikhs gunned down at a temple in Wisconsin in 2012 and the three people murdered at a Jewish Community Center in Kansas in 2014 by white supremacists.

And that doesn’t even include the violent right-wing anti-government groups like the Sovereign Citizens movement that has in recent years killed police officers and attacked government offices.

But still not a peep from these GOP candidates. Yet Cruz has no problem finding time to demonize the Black Lives Matter (BLM) movement. Just last month he claimed that some BLM protesters are “embracing and celebrating the murder of police officers.”

And a BLM protester was assaulted at a Trump event Saturday night after the man yelled out “black lives matter.” Shockingly, Trump defended the assault saying, “Maybe he should have been roughed up,” adding, “It was absolutely disgusting what he was doing.”

Within days of Trump’s defense of this assault, five BLM protesters were shot at a rally in Minneapolis by three white men that were reportedly white supremacists.

If these GOP presidential candidates truly want to keep Americans safe, it’s time they stop ignoring the threat posed to Americans from the right.