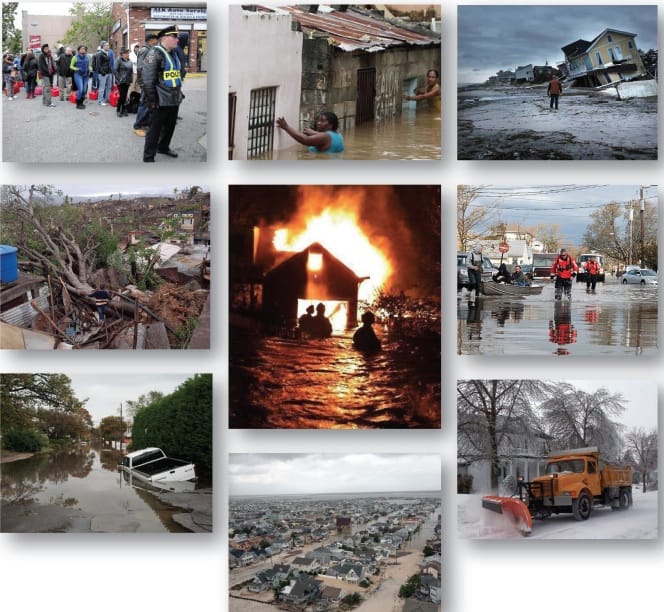 In the vengeful wake of what has been described as ‘the perfect storm’, Hurricane Sandy has left over a hundred lives lost and tens of billions of dollars in damage to the infrastructure of New York, New Jersey and other states. However, even more than those dire circumstances, it has left many with unanswered questions as to how and why.

Ultimately, the explanation from meteorologists is ‘natural disaster’, while many hide behind the term ‘Mother Nature’ to explain away their lack of understanding. There were no answers provided, but the cause and effects are clear when oppression is widespread, sin is common, and perversion is rampant. It is the law of consequence. If the people do not stop open sin and oppression, and instead follow the Ten Commandments, then more wraths will come.

Hurricane Sandy incapacitated bus, flight, subway and train systems; flooded homes and businesses; inundated cities with sewage and chemical-laden water; and left millions without power. Journalist Mike Snyder, writing for Market News Daily.com, expressed the sheer unimaginable magnitude of the storm that had ripped through the Caribbean and was now engaging its affront on the northeastern US. “It is hard to describe how gigantic this storm actually is. From end to end, Hurricane Sandy is more than 1000 miles across; twice the size of the state of Texas.” According to scientists, ‘the perfect storm’ was the result of a number of ‘natural’ elements combining with eerie precision to form an environmental storm of such unprecedented mammoth size, force and power.

How many would predict that there is consequence for the open sin being committed in this, modern era of immorality. Is there to be no consequence for so great a number of mankind having discarded Divine Guidance for folly, sin and disbelief, and the rejection of our Exalted Lord and the righteous life path that He intended for mankind? Could the physical manifestations which reflect some small aspect of the Unimaginable Power and Might of The Almighty Creator (wind, rain, the oceans and seas) have been commanded by Divine Order to return to the law of consequence?

When the people of Moses (peace be on him) were oppressed by Pharaoh, he (Pharaoh) was given 9 signs including locusts, lice, mice, frogs, and blood. He, in his arrogance and denial claimed it was ‘Mother Nature’; never did he say, it is the wrath of the Almighty God. He continued to oppress the messenger, Moses (peace be upon him), and the Children of Israel. Then it came to pass; he (pharaoh) was drowned. Sodom and Gomorrah was not just another fairy tale. It was a planned target to be destroyed with fire and brimstone by the Almighty, One God. Their messenger was Lot (peace be upon him) and he was saved along with his family, except for his wife. The dissidents mocked and killed the Holy Messengers (peace be upon them all), refusing to refrain from sin. Those with true knowledge of the ways of The Almighty Creator recount how the rejecters of His Signs were overtaken by the instruments of His Wrath.

All the rebels will be destroyed unless they turn back to the Almighty and seek His forgiveness. Of the thousands of miles of ocean, why then, if it was ‘Mother Nature’, didn’t Sandy go out to sea? Is Mother Nature a phenomenon that is happening on its own? “Or do those who do ill-deeds imagine that they can outstrip Us (Almighty Allah and His Angels)? Evil (for them) is that which they decide. Whoso looks forward to the meeting with Allah (let him know that) Allah’s reckoning is surely near, and he is The Hearer, The Knower.” Holy Qur’an: Surah 29, Lines 4, 5.

The experts were puzzled that Hurricane Sandy came in toward the coastal states to meet her target. In reality, the total sovereignty over every created thing is indeed its Almighty Creator! Mankind should not remain deluded from the Truth of the Universal Law of the Return of Deeds.

Reuters reported Kevin Trenberth, a senior scientist in the Climate Analysis Section at the National Center for Atmospheric Research in Boulder, Colorado as saying, ‘the jury was still out’ on explanations for how this unique weather phenomenon came about. “There are clearly changes in the environment that all of these storms are occurring in,” he said. As for Sandy, however, a lot of the weather conditions that lined up were due to a “crap shoot.” A hybrid storm can be an explosive storm – “what we might call a meteorological bomb.” Did these elements spontaneously converge?

What an immature and preposterous proposition!

The many prayers, pleas and petitions that were feverishly rendered to the Most Powerful, Exalted and Almighty Creator during this calamity is proof that we inherently lean towards a Divine Supporter, as He, The Most Wise, indeed intended. The signs are to warn the oppressors, the deviants, the perverts and the blasphemous to stop now! His Perfect Signs, like the ‘perfect storm’, are the Ultimate Confirmation for all who accept His Sovereignty and a sober warning that those who commit crimes against Almighty Allah and all He holds as Sacred have waged war against a Mighty Adversary whom they will never outstrip. First row left to right: Gas shortage in NY and NJ causes gas rationing. Women try to escape flood waters in Cuba devastated by superstorm before it reach the US.. Beach-side house collapses in NY. Second row left to right: Tree crushes a home in the Caribbean island of Jamaica, where Sandy struck as a Category 2 tropical storm. Firefighters are unable to stop spreading fires in Breezy point NY. Police in Staten Island, NY rescue residents stranded in their flooded neighborhood. Third row left to right: Hundreds of vehicles submerged in the saline (corrosive) seawater may be unusable.Aerial view of storm-surge flooded NJ. streets; Sandy’s Arctic weather system arrives as a snowstorm in Canada.