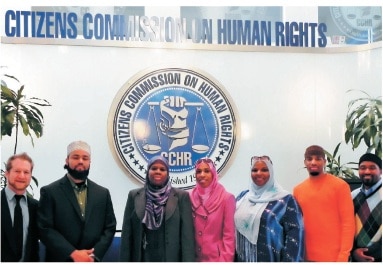 The delegation representing the Abdul Qadir Gilani Institute of Sufic Sciences completed their three day reception at the headquarters of the Citizens Commission on Human Rights (CCHR) in Los Angeles, California, where they successfully debuted the newly updated El Gilani Methodology (EGM) Journal.

As the AQG delegation prepared for the main event on Saturday evening, the 43rd CCHR Annual Human Rights Award Gala, news of the death of singer Whitney Houston buzzed around the elegant ballroom, quickly followed by allegations regarding the cause – an overdose of prescription drugs, particularly, the popular psychotropic drug Xanax.

Today’s headlines reveal an alarming trend: “17 Teen Girls Hit in Twitching Epidemic, But Doctors Say Its All In Their Heads”…“Twilight Movie ‘Breaking Dawn’ Induces Seizures, But Doctors Say Photosensitive epilepsy”…“Whitney Houston Cause of Death a Mystery – Xanax to Blame?”

The US news media is flooded with reports like these describing mystery illnesses and their associated ‘theoretic’ cause. Similar episodes are occurring all over the world, where people are suffering in complete misery, with no hope, often left to die – even, at times, by their own hands. The profession that is supposed to know the answers to our mental woes and cure our mental afflictions -psychiatry- does nothing but supply medications and use barbaric techniques to aid in this mental death; even worse, they capitalize on this despair.

There is, however, the light of hope on the horizon. The International Quranic Open University (IQOU) is dedicated to reversing this trend. Decades ago, the founder of the IQOU, His Eminence Dr. Mubarik Gilani, developed the El Gilani Methodology (EGM), a scientifically proven system that is directed at the true etiology of imbalances in mental health and provides a curing solution to these maladies. The Abdul Qadir Gilani Sufic Science Institute–a special branch of the university–was developed to deal directly with this issue, and earlier this month a team of top clinicians and staff representing the Institute traveled to Los Angeles, California to begin a re-introduction of this scientific method to the world. In addition, we intended to rekindle our previously established coalition with the The Citizens Commission on Human Rights (CCHR), a mental health advocacy and watch-dog organization, whose goal is to alert the world to the fraudulent, abusive practices and crimes against humanity at the hands of the psychiatric industry.

Every year, the CCHR has an award banquet honoring individuals who have, in some way, fought against the oppression perpetrated all over the world by the malpractice of psychiatry. This year featured a mother from New Zealand whose 17 yr old son was the victim of suicide, directly related to psychotropic drugs he had been taking. Another winner was a Detroit mother who fought against the city for the custody of her daughter. The city of Detroit had tried to force the mother to give her daughter mood altering medications; when she refused, they sent a S.W.A.T force equipped with heavy artillery–including a tank–to her house. Perhaps one of the most intriguing individuals to win an award was Lisa, a psychology professor at two local universities in Los Angeles, where she instructs her students on the truth about the commercial mental health industry and how its goal is not to help, but exploit mankind.

The AQG Institute delegation was invited, as VIPs, to attend all the functions of the entire weekend dedicated to the event. This included a pre-award dinner the day before the banquet, where individuals from all over the world sought to know about EGM and participated in very engaging discussions. The next day was the award ceremony, where the very dapper and elegantly dressed AQG team dined with many people who fight for human rights everyday and to end the oppression of people suffering all over the world. After dinner, many people approached the AQG Institute delegates for information and for the coveted EGM Journals that had garnered interest all weekend. The last event of the weekend was the CCHR commissioner’s meeting, where the CCHR agenda for the upcoming year is discussed. Here, the AQG Institute representatives had an opportunity to officially introduce EGM and state its purpose, which is to truly help mankind by offering the only scientifically proven system to CURE aberrations in mental health.

This system was developed over 35 years ago in response to the World Health Organizations challenge to scientifically prove the healing effects of the Holy Quran. From 1976 to 1977, the world received the first scientifically controlled proof of the effectiveness of the El Gilani Methodology (EGM) to cure various mental and physical diseases. For over 11 months, El Sheikh Gilani demonstrated and documented the healing qualities of Holy Quran before an international panel of doctors and psychiatrists at the Psychiatric Research Center of Shahar Hospital, in Taif, Saudi Arabia. Patients suffering from schizophrenia, chronic depression, epilepsy, insomnia, night fright, chronic joint pain and more, were completely healed, while members of the Saudi press and the world looked on. The following excerpt is from the Saudi daily Al Nadwa, written by Haamid Salimi in 1976, noting acclaim for the success of the revolutionary healing modality – EGM :

“For the first time in the world, healing with the Holy Qur’an has been proven [scientifically]. A complete wing has been established in the Shahar Mental Hospital, Taif, where this type of therapy is being practiced. This project commenced last month [1976] under the supervision of a group of qualified doctors, headed by one Dr. Osama Radi, who are healing various [mental and physical] conditions through selected lines of the Holy Qur’an. The Honorable Sheikh Mubarik Gilani is the physician who has formulated this Qur’anic therapy and successfully removed all doubts which had been raised by some people about the therapy.”

Today, EGM is utilized worldwide to cure those suffering from deteriorated mental health. It is very important to note that EGM is a healing system designed for all of mankind and thus does not attempt to propagate the religion of Islam. At the AQG Institute, we are dedicated to informing the world at large about this methodology. It is our duty to mankind to do all we can to tell the world there is a cure for all that ails us mentally and a means to happy and healthy lives!