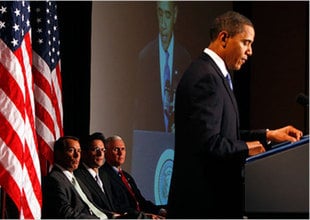 What was novel and historic about this session was the president’s fielding of questions from lawmakers across the political aisle, on their own turf – a Republican political meeting – in an effective and disarming manner. These are GOP politicians who would not ordinarily find themselves in a one-on-one venue with the Democratic president.

The nation and the world observed an amazing event in President Barak Obama’s question and answer session at the GOP House Issues Conference, held in Baltimore, Maryland. The televised gathering of Republican legislators, advisors, and their families, who listened intently – as did millions of Americans and others around the world through the technology of streaming audio and video via the internet- were witness to what the President deemed "absolutely essential" discussion; and what House Minority Whip Eric Cantor called " a first… [and] we hope (House Speaker Nancy) Pelosi and (House Majority Leader Steny) Hoyer will follow the president’s lead.”

What was novel and historic about this session was the president’s fielding of questions from lawmakers across the political aisle, on their own turf – a Republican political meeting – in an effective and disarming manner. These are GOP politicians who would not ordinarily find themselves in a one-on-one venue with the Democratic president. Interesting was the apparent willingness of the GOP to host a Democratic president, as well as the varying demeanors of the cross-section of GOP representatives who queried the president – a sort of microcosm of the types of opposition the Obama administration faces daily in meeting halls and and caucuses of Congress and the Senate. Most expected a showdown, and all received exactly that: one of the most (if not the most) impressive instances of direct and genuine honesty and integrity coupled with sincerity ever conveyed to an audience ( and the Americans who elected him) by an elected official under ‘attack;’ qualities perceived from this president before the election was won. President Obama set the tone at the very outset by acknowledging the fact that he "wanted to speak with all of you, and not just to all of you," referring to the GOP leaders gathered at the conference, and implying that this type of close-quarters discussion is an opportunity for real dialogue without the most impenetrable and unproductive political barriers that traditionally exist. Armed with hard facts, on-point statistics, and consensus mined from the numerous consultant think-tanks the president wisely organized before his inauguration, Mr. Obama responded with restraint and poise, and a natural confidence that could be detected in his reiteration of the language that convinced the American people to provide him the opportunity to serve our nation: "And I’m not a pundit. I’m just a President, so take it for what it’s worth. But I don’t believe that the American people want us to focus on our job security. They want us to focus on their job security. I don’t think they want more gridlock. I don’t think they want more partisanship. I don’t think they want more obstruction. They didn’t send us to Washington to fight each other in some sort of political steel-cage match to see who comes out alive. That’s not what they want. They sent us to Washington to work together, to get things done, and to solve the problems that they’re grappling with every single day." Most of us continue to be refreshed by the direct sensibility and intellect displayed by the president after years of harsh, impersonal, political rhetoric; he maintained his arguments not in as erudite but as the nation’s chief elected from the people, still intently concerned for their well-being. He defended his stances in a powerfully humble manner with no political posturing, an example which left his opponents no option but to follow.

President Obama never claimed that he would be able to completely rectify the disastrous results of previous leadership, and the American people never really expected him to perform such a feat. That is not why he was elected. Truth, morality, justice, and honesty in government are dormant seeds embedded deep within the soil of the desert that is the western political system. Should by the Grace and Power of The Almighty President Obama be able to inject even the vapor of these virtues into the clouds that cover Washington, it may produce the ‘rain’ that will revive them to a state of life and germination – a miracle, but the hope that elected him.