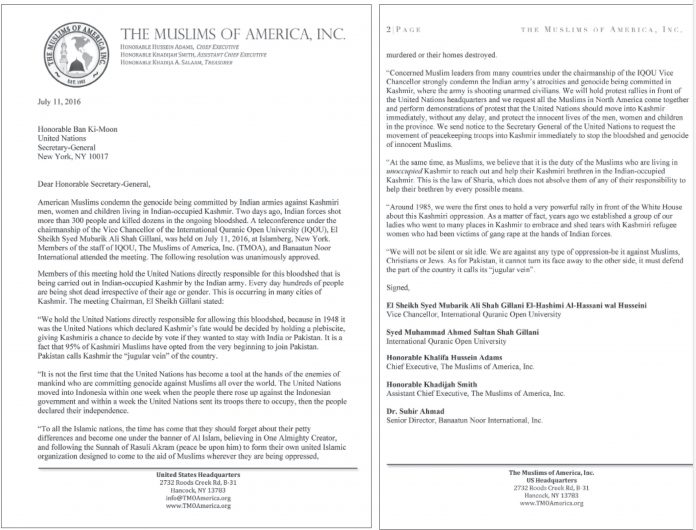 American Muslims condemn the genocide being committed by Indian armies against Kashmiri men, women and children living in Indian-occupied Kashmir. Two days ago, Indian forces shot more than 300 people and killed dozens in the ongoing bloodshed. A teleconference under the chairmanship of the Vice Chancellor of the International Quranic Open University (IQOU), El Sheikh Syed Mubarik Ali Shah Gillani, was held on July 11, 2016, at Islamberg, New York. Members of the staff of IQOU, The Muslims of America, Inc. (TMOA), and Banaatun Noor International attended the meeting. The following resolution was unanimously approved:
Members of this meeting hold the United Nations directly responsible for this bloodshed that is being carried out in Indian-occupied Kashmir by the Indian army. Every day hundreds of people are being shot dead irrespective of their age or gender. This is occurring in many cities of Kashmir. The meeting Chairman, El Sheikh Gillani stated:
“We hold the United Nations directly responsible for allowing this bloodshed, because in 1948 it was the United Nations which declared Kashmir’s fate would be decided by holding a plebiscite, giving Kashmiris a chance to decide by vote if they wanted to stay with India or Pakistan. It is a fact that 95% of Kashmiri Muslims have opted from the very beginning to join Pakistan. Pakistan calls Kashmir the “jugular vein” of the country.
“It is not the first time that the United Nations has become a tool at the hands of the enemies of mankind who are committing genocide against Muslims all over the world. The United Nations moved into Indonesia within one week when the people there rose up against the Indonesian government and within a week the United Nations sent its troops there to occupy, then the people declared their independence.
“To all the Islamic nations, the time has come that they should forget about their petty differences and become one under the banner of Al Islam, believing in One Almighty Creator, and following the Sunnah of Rasuli Akram (peace be upon him) to form their own united Islamic organization designed to come to the aid of Muslims wherever they are being oppressed, murdered or their homes destroyed.
“Concerned Muslim leaders from many countries under the chairmanship of the IQOU Vice Chancellor strongly condemn the Indian army’s atrocities and genocide being committed in Kashmir, where the army is shooting unarmed civilians. We will hold protest rallies in front of the United Nations headquarters and we request all the Muslims in North America come together and perform demonstrations of protest that the United Nations should move into Kashmir immediately, without any delay, and protect the innocent lives of the men, women and children in the province. We send notice to the Secretary General of the United Nations to request the movement of peacekeeping troops into Kashmir immediately to stop the bloodshed and genocide of innocent Muslims.
“At the same time, as Muslims, we believe that it is the duty of the Muslims who are living in unoccupied Kashmir to reach out and help their Kashmiri brethren in the Indian-occupied Kashmir. This is the law of Sharia, which does not absolve them of any of their responsibility to help their brethren by every possible means.
“Around 1985, we were the first ones to hold a very powerful rally in front of the White House about this Kashmiri oppression. As a matter of fact, years ago we established a group of our ladies who went to many places in Kashmir to embrace and shed tears with Kashmiri refugee women who had been victims of gang rape at the hands of Indian forces.
“We will not be silent or sit idle. We are against any type of oppression-be it against Muslims, Christians or Jews. As for Pakistan, it cannot turn its face away to the other side, it must defend the part of the country it calls its “jugular vein”.