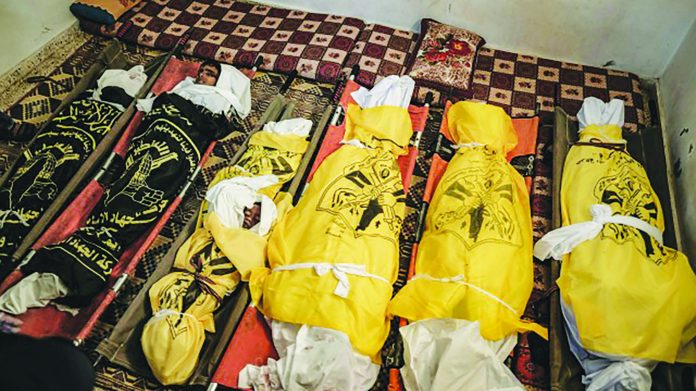 Israel Is Killing Children Asleep In Their Homes. Humans. Not Numbers. Again. The reign of terror, which we help fund, goes on. In the last two days of airstrikes over the open-air prison that is Gaza, where two million beleaguered people, almost half of them children, are packed and trapped, Israel has killed at least 34 Palestinians and injured more than 111. Many of the victims were children. The dead included eight members of the Sawarkah family – three adults, five kids – killed around midnight as they slept in their modest home without running water or electricity. The only survivor of the slaughter of the Sawarkahs was a month-old girl named Marah; her mother, father, aunt, and siblings were all buried in the rubble. A relative, Taleb Mesmeh, said that when people heard the explosions, “We never expected (they’d target) a civilian home that looked like any normal house.” The retrieved bodies “were torn into pieces, and there was blood everywhere,” he said. “This is Israel targeting children inside their homes.” Then he began picking some children’s school uniforms from the rubble. “This is Mo’ath’s school uniform,” he wailed. “She was still in first grade. What did she do to be killed?”

On Thursday, Nov. 14, Israel declared a tentative ceasefire. But many critics noted the false equivalence of the term – the murdered are not the murderers, the occupied are not the occupiers – given that, despite Palestinians allegedly firing 450 rockets, no Israelis were killed. And despite Israel massacring eight members of the same family in one cruel blow, if and when the current carnage ends, Palestinians will remain under siege by the same brutal powers that killed their relatives and neighbors and friends. On social media, meanwhile, pictures are still emerging – Warning: Graphic – of bloody bodies, sobbing children, small torsos being frantically dug out of the rubble. Miko Peled, an Israeli-American activist/author, and son of a renowned Israeli general, sometimes recalls an earlier offensive when Israel undertook a 21-day, 100-ton carpet-bombing of Gaza. The first day, he says, Israel timed the bombs to fall precisely between the start of morning and afternoon school sessions, to ensure that most of the area’s 800,000-plus children would be in the street. “If that’s not terror,” he says, “I don’t know what is.”

“I am Ghassan from Gaza! I love life. I am still a youth who have alot of dreams to achieve. I just want peace…Don’t leave us alone in Gaza.” – Ghassan Alkhatib