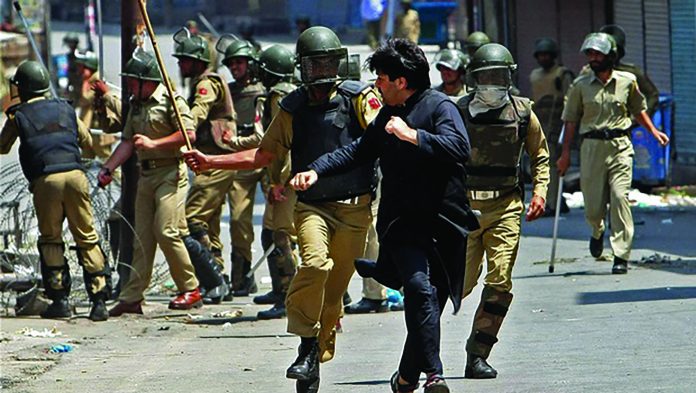 The incident took place on September 13 in the Kakriyal forests in the Reasi area of Jammu in the southern part of the disputed territory after a seven-hour gun battle in which the army killed three rebel fighters.

Soon after the fighting was over, the image of Indian soldiers dragging the dead fighter with his face down and his feet chained surfaced on social media, attracting widespread condemnation.

Meenakshi Ganguly, South Asia director at U.S.-based Human Rights Watch (HRW), demanded an immediate inquiry into the “disgraceful action by soldiers in Kashmir who, apparently fearing rigged explosives, dragged the body of a slain militant with a rope”.

The Geneva Conventions, of which India is a signatory, prohibit the mutilation of dead bodies in a conflict.

“Even the dead have no respect in Kashmir,” Mubashir Naseer, a 35-year-old local, told Al Jazeera. “When these things come in the media, it creates deep hatred. It does not change anything. It only exposes how the army is acting in Kashmir,” he added.

Another picture shared widely on the social media purportedly showed Rakesh Sharma, member of a right-wing Hindu organisation called Bajrang Dal, taking a selfie with the dead rebel lying in the background.

The authenticity of the photograph could not be independently verified.

‘Normal operating procedure’
But a senior Indian army officer, speaking to Al Jazeera on Sunday on condition of anonymity, dismissed the criticism.

“I don’t know why should it create a discussion. You have to see for what cause the person came for. This should be done to him,” he said.

The army officer said the dragging of a rebel’s corpse after a gun battle is part of their “normal operating procedure” and a “safety measure” since explosives could be attached to their bodies.

“We don’t physically touch the body. A rope is tied to the feet and it is dragged. Sometimes, they can be alive also. There could be booby traps, explosives and grenades tied to the body, which has had happened many a times,” he said.

‘Barbarism and hatred’
For close to three decades, since separatist violence intensified in the disputed region, the Indian army has frequently faced allegations of human rights violations.

“The Indian army, as usual, defends itself with one or the other pretext. According to the international humanitarian laws, just like the prisoners of war, a dead body is also to be preserved and respected,” Khurram Parvez, a Kashmir-based human rights activist, told Al Jazeera.

Parvez said such “desecration” of the rebels’ body only shows the “barbarism and hatred” of the Indian army and has been going on in Kashmir “for the last 28 years”.

“Not many times has it been captured on camera. But it happens here,” he said, claiming that the dead bodies of three rebels were burned after a gunfight in south Kashmir’s Pulwama region last year.

The Kashmir region, meanwhile, continues to witness gun battles between separatist fighters and Indian forces. During mid September five rebels and a civilian were killed in Kulgam village of south Kashmir. Within the same time frame another 10 rebels were killed in three separate fights.

Tens of thousands of people have been killed in the violence after the armed rebellion against Indian rule began in the early 1990s.

Both India and Pakistan make a full claim over the territory and have already fought three wars over it.

The separatist fighters are demanding either a merger with Pakistan or an independent state.

In July, India rejected a first-ever report by the United Nations Human Rights Council, which had suggested setting up a commission of inquiry to conduct an independent international investigation into allegations of human rights abuses in Kashmir.