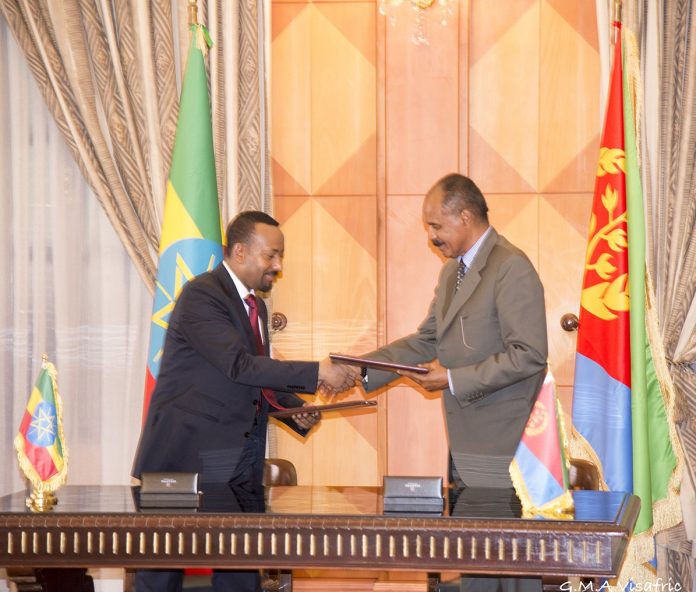 As of July 9, it’s official: the war is over between long-time enemies Eritrea and Ethiopia. A document to the effect was signed by Eritrean President Isaias Afwerki and Ethiopian Prime Minister Abiy Ahmed in the Eritrean capital of Asmara.

“This is perhaps one of the biggest news in recent years that emerged from this part of Africa,” Solomon Dersso, senior researcher with the Institute for Security Studies and an adjunct Professor of Human Rights Law with the Centre for Human Rights and School of Law, Addis Ababa University, told DW.

The “Joint Declaration of Peace and Friendship” puts an end to a decades-old conflict which peaked in a war between 1998 and 2000 that claimed 80,000 lives. In 2002 an independent commission told Ethiopia to return territory along the border to Eritrea, but Addis Ababa refused to do so.

There followed a state of cold war with occasional skirmishes along the border and the financing of terrorist groups to topple each other’s governments. Relations between both countries were cut, separating two populations which historically, culturally and even economically share much more than divides them.

Muneer Romat, an Eritrean lawyer based in London, summed up the prevailing feeling in both countries: “I’m really happy. Not only happy. It is a feeling I can’t even describe.”

Peace started to become a possibility when 41-year-old old former intelligence officer Abiy Ahmed took office as Ethiopia’s prime minister in April. He has introduced sweeping reforms and  agreed to hand the town of Badme over to Eritrea, along with chunks of land along the border.

This made possible the pact just signed. It capped weeks of an initiative launched by Abiy, which has now resulted in agreements on resuming airline and telephone connections, ensuring accessibility to ports and reopening embassies.

Geresu Tufa, an Ethiopian political activist and analyst based in the Netherlands, told DW that the agreement will not only help end the conflict in the region. “It is also help for the economic development. I think it will have a lot of good things,” he said.

While Ethiopian access to Eritrea’s ports and free movement across the borders will be an economic boon for both countries, economics alone fail to explain the reasons behind what many see as a historic development.

“I think this is better explained in terms of the bold imagination that Prime Minister Abiy Ahmed showed in extending an olive branch and also in showing a commitment to his policy pronouncements  for making peace with Eritrea,” Ethiopian analyst Dersso said.

Muneer Romat, an Eritrean lawyer based in London, agrees that much is owed to the personality of Addis Ababa’s head of government: “I was intrigued by his vision, plan and the pace. He’s very quick, fast, direct and to the point. I’ve found him to be transparent, honest, clear and open.”

Peace between the neighbors will certainly not benefit the economy alone. Eritrea has long used the conflict as an excuse for its repressive policies. They include an indefinite national service program which the United Nations has likened to slavery. Many young Eritreans have tried to reach Europe to escape the repressive regime.

“Now that this tension and threat from Ethiopia is no more, the expectation is that it could have direct impact on the domestic politics of Eritrea,” even if it is not clear yet whether the consequences will be felt in the short term, Dersso said.

According to the analyst, what happened has to be understood in the “broader context of the changes that are happening in Ethiopia” that Abiy has launched a reform agenda that saw prominent dissidents freed from jail and the condemnation of torture as state-sanctioned terrorism. It also includes a partial liberalization of the economy.

A chance to appease the region

Not everyone in Ethiopia seems happy about the prime minister’s reform drive. Last month a grenade was thrown at a rally the prime minister addressed in the capital. But Ethiopia’s head of government can count on the full support of the international community in his effort to normalize relations with Eritrea. UN Secretary General Antonio Guterres called the rapprochement between Ethiopia and Eritrea “illustrative of a new wind of hope blowing across Africa.”

That is because good relations between the neighbors could help stabilize the whole region.

“I think because of the problems between the two countries the region has been in disturbance for the last twenty years. I mean, problems in Somalia and in South Sudan are in some ways related to the hostile relations between [Ethiopia and Eritrea],” Tufa said. It follows, according to the analyst, that reconciliation between Addis Ababa and Asmara could also help solve the conflicts in the region.