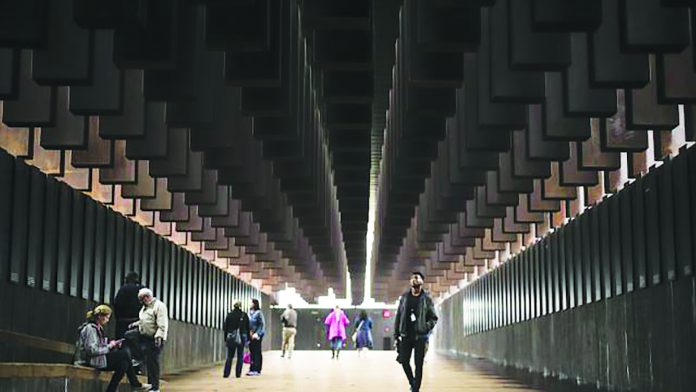 The memorial’s designers documented more than 4,000 public lynchings that took place in the American South.
America’s first lynching memorial is set to open in Montgomery, Alabama, dedicated to thousands of victims of racism and murder.
The National Memorial for Peace and Justice sits on a six-acre site overlooking the state capital. It is, in part, inspired by the Holocaust memorial in Berlin and the Apartheid Museum in Johannesburg, South Africa. The memorial is a project of the Equal Justice Initiative (EJI), a legal and civil rights charity that represents the poor, juvenile offenders, and death-row inmates, along with the group’s head – MacArthur “genius” grant winner Bryant Stevenson.
EJI said on its website that the memorial stands as a “legacy of enslaved black people, people terrorised by lynching, African Americans humiliated by racial segregation and Jim Crow, and people of color burdened with contemporary presumptions of guilt and police violence”. Mr Stevenson and lawyers spent years researching and documenting almost 4,400 incidents of these types of lynching across the American south.
The group began work on the $15m memorial in 2010 and the location is significant as Montgomery is the birthplace of the Civil Rights movement and where Rosa Parks famously refused to give up her seat on a city bus in 1955. The site is just a mile away from the state capitol building and a slew of statues commemorating the Confederacy, the collection of states that seceded from the U.S. and started the bloodiest war in American history over the issue of keeping slavery going.
When asked why he did not want to build the memorial in Washington DC, Mr Stevenson said he “really believes it is important for Americans to make the journey, take the trip, and get proximate to the part of this country where this legacy was most intensely felt”.
The Washington Post reported that the design is “as clear-sighted, uncompromising and architecturally effective as any American design since Maya Lin’s 1982 Vietnam Veterans Memorial”.
More than 800 coffin-like columns are suspended from a canopy, resembling the colonnade of the Lincoln Memorial in Washington DC from afar. Visitors walk a path with four right angles to view the large, oxidized steel pillars, which are engraved with the names of American counties and the number of African-Americans who were lynched there.
As the New York Times described it: “The columns meet you first at eye level, like the headstones that lynching victims were rarely given. But as you walk, the floor steadily descends; by the end, the columns are all dangling above, leaving you in the position of the callous spectators in old photographs of public lynchings,” which were attended by many.”
Duplicates of the steel pillar-coffins are laid horizontally outside of the memorial as well, and Mr Stevenson said he hoped the counties would come claim them and put them on display in their respective locations. Those that do not, would be left at the memorial for all to see.
Included along the walk are names of people who were lynched and descriptions of their alleged crimes: “Parks Banks, lynched in Mississippi in 1922 for carrying a photograph of a white woman,” one read. “Mary Turner, who after denouncing her husband’s lynching by a rampaging white mob, was hung upside down, burned and then sliced open so that her unborn child fell to the ground,” the newspaper reported about another horrifying lynching detailed in the memorial. Accounts included stories of amputation, castration, and mutilation as well.
Sculptures depicting slavery in various forms and mediums are on the grounds as well. Jars of dirt adorned with the names of victims, collected from the sites of their lynchings, are also on display.
The memorial opened to the public on April 26.