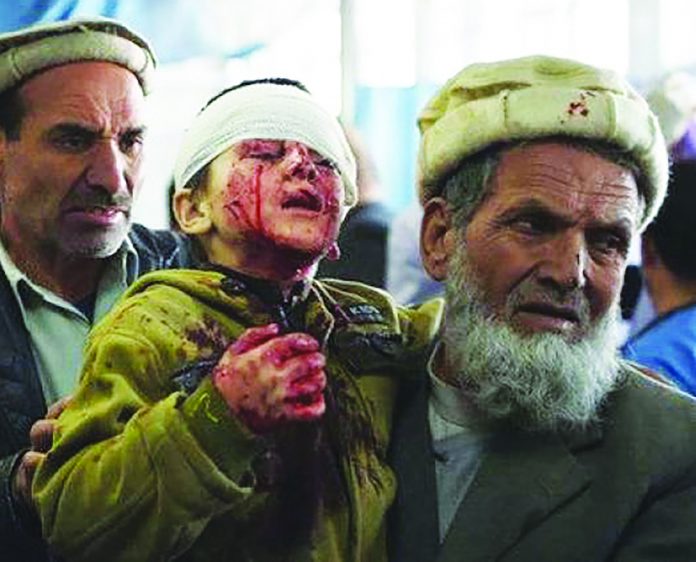 Amid conflicting reports of casualty numbers from the Afghan government, local officials confirmed to DW that the incident killed both Taliban militia and civilians.

“The airstrike was carried out on a Taliban military area, which sadly killed civilians too. We are investigating to find out what these civilians were doing in the area,” Nematullah Temori, spokesman for the Kunduz governor, told DW.

However, locals are presenting a different picture than Afghan officials. Most victims, according to them, were young children who were attending a ceremony called Dastar Bandi in a local madrasa, which celebrates young men completing the memorization of the Koran.

“I attended the burial of at least 40 children who were killed in the airstrike. More than 15 are still missing,” Khalid Yousufi, a local resident who also lost relatives in the incident, told DW.

“The government justifies [the attack] citing Taliban presence, but the area is under Taliban control and there are always members of the group in gatherings,” he added.

According to a provincial spokesman, over 50 civilians wounded in the attack were brought to a hospital in Kunduz city. “So far, seven of them have lost their lives due to the severity of their injuries,” he said.

Caught in the middle of conflict

The latest incident highlights the hardship Afghans who live in contested or Taliban-controlled areas endure.

Civilians are used as human shields by the Taliban, falsely targeted by government forces or simply trapped in the middle of a bloody conflict. They have paid a heavy price in the 17-year-long Afghan war.

“The Taliban have taken away our normal way of life. We have lost everything to war, but the government mistakes us for the same group instead of giving us protection,” local resident Yousufi said.

“We are prisoners of this war,” he added.

A massive truck bomb killed at least 90 people in the Afghan capital, Kabul, on May 31, 2017. The target of the attack was Kabul’s heavily fortified diplomatic area in the “Green Zone.” The German Embassy in the area was extensively damaged. No group claimed responsibility for the attack, but the Taliban and the “Islamic State” (IS) have staged large attacks in the city in the past.

The blast in Kabul’s diplomatic enclave was the latest in a long line of attacks on the Afghan capital. Earlier in May, eight foreign soldiers were killed in a bomb attack claimed by IS. In March, insurgents attacked an Afghan military hospital in Kabul’s diplomatic district, killing 38 people and injuring more than 70 others, mainly patients, doctors and nurses.
In April, Afghanistan’s Taliban vowed to ramp up assaults on coalition and Afghan security forces, announcing the start of their annual spring offensive. The group said they were changing tactics for this year’s operation, naming it “Operation Mansour” after the group’s late leader who was killed in 2016 in a US drone strike.

US President Donald Trump has yet to announce his Afghanistan policy. Afghanistan expert Michael Kugelman told DW Trump’s Afghanistan policy will in many ways be quite similar to that of the Obama administration. “Like Obama, Trump will likely also express support for the idea of reconciliation between the Taliban and the Afghan government,” said Kugelman.

But the Taliban have shown no interest in peace talks. Afghanistan observers say it is unlikely that the militant group will engage in any negotiations, as they currently have the upper hand on the battleground. The Taliban now control more Afghan districts than at any other time since 2001.
DW.com