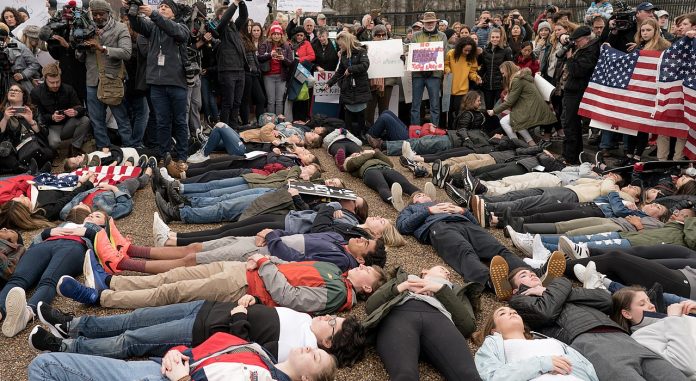 By Shazia A. Alim
On February 14, 2018 a tragedy occurred within our country, erasing the smile of many parents, grandparents,and siblingings who lost their beloved children, grandchildren, brothers, and sisters in this heartbreaking incident. As someone who has recently graduated from high school, it pains me to see my peers face such atrocities. However, it is even more painful to watch them beg for people to care about their safety. These shootings are not the fault of the victims. In fact, it is the fault of those who have sworn to protect this country and every citizen.
According to Gun Violence Archive there have been 345 mass shootings in America in 2017 alone. They have also reported that more than 14,000 people have been killed and over 29,000 injured in 2017 due to gun violence. With this ignominious amount of gun violence in one year, it is not absurd to think that something would be done. However, this Florida shooting is an indication that nothing has been done, and 2018 will most likely be same.
The call for gun control has been ensuing for many years now, but has always proven to be abortive. Now, we, the youth, have taken a stand for change. Young people, students are organizing everywhere, participating in walk-outs and making their voices heard through social media. However, the question remains. “Will there ever be change?”
The most common response is that stricter gun laws could jeopardize the second amendment, the right to bear arms. In reality, the NRA is too concerned with making a profit off selling military weapons to worry about the damage they are causing. Politicians are too concerned with keeping their positions to properly carry out their responsibilities and do what is best for this country. Even our president seems to have a callous attitude toward the Florida shooting.
How many more of us will die as a result of gun violence? How many more loved ones must we lose until this country opens its eyes? When will we realize that this is no longer about “the right to bear arms” but saving our love ones?