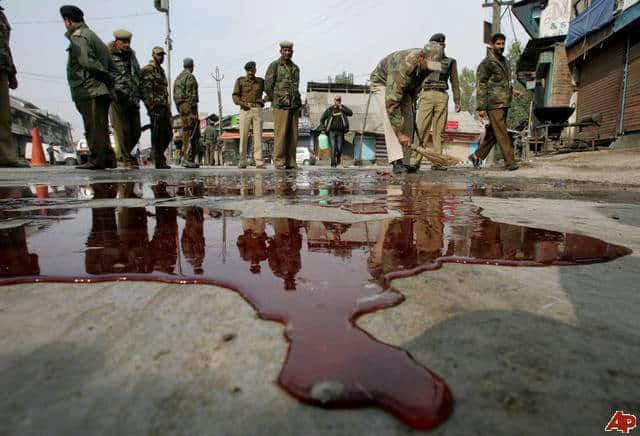 Srinagar, India-administered Kashmir – At around 6:30 am on January 20, 1994, the Indian Army cordoned off the Barzulla Baghat locality in Srinagar, the summer capital of Indian-administered Kashmir. An announcement was made from the parapet of a nearby mosque, asking men to assemble at a ground behind the Saddar Police Station.

“We shivered in cold, as the 5th Garhwal Battalion of the Indian Army checked our ID-cards,” said Imtiyaz Ahmad Shah, a man in his mid-forties, as he sipped coffee at a Barista outlet at Rajbagh in the heart of Srinagar.

Of all the men, Imtiyaz’s 24-year-old older brother, was detained by the army. He was well-known in his locality as a boxer and was endearingly called Fayaz Boxer.

“Few knew that his full name was Fayaz Ahmad Shah,” reminisced Imtiyaz. He said his older brother had once been a rebel fighter.

“In 1990 he joined the Hizbullah, an indigenous militant group in Indian-administered Kashmir. He then crossed over to Pakistan for arms training towards the end of 1990. When he returned to Srinagar after around three months, in March 1991, he was arrested from our residence in Baghat,” Imtiyaz said.
Fayaz was then taken to Papa 2, the Border Security Force’s, BSF, infamous interrogation centre, from where, locals claim, nobody returned alive. It was shut down in 1996.

Currently, it is the official residence of the Jammu and Kashmir state Chief Minister Mehbooba Mufti.

Fayaz was lucky, he was tortured brutally but not killed, his brother said. After a month or so, he was sent to the Jammu Central jail.

“Those days the TADA [anti-terror] court was set up at the Central Jail’s premises itself. My brother was granted bail in December 1992,” Imtiyaz recalled.

After being released from jail, Fayaz wanted to turn the page and start a new life at the age of 23. He took a loan from J&K Bank after his ageing parents agreed to mortgage a land they owned at Barzulla Baghat. He set up a poultry farm and looked to the future with hope.

Little did he know what awaited him on that frozen January day in 1994.
An hour after the 5th Garhwal Battallion, a unit of the Garhwal Rifles of the Indian Army, detained Fayaz, the news came that they had taken him to a makeshift interrogation centre at Jehangir Colony, close to the Saddar Police Station in Baghat, Srinagar.

“In the 1990s, the forces often converted the abandoned houses of the Kashmiri Pandits, the Hindu minority group which fled the region, into interrogation centres. Udhar usko peet peet kar maar daala (they beat him to death there),” said Imtiyaz with a palpable anger, and his voice choked for the first time.

Custodial killings were the order of the day during the peak of armed rebellion in early 1990s, allege rights group. It is believed hundreds, perhaps thousands, perished in the interrogation centres, locally known as torture chambers, run by the armed forces, though there is no official figure available.

Al Jazeera reached out to the state government, but until the time of publication of the article no response was received.

“It is difficult to provide a figure. Records had not been maintained; most of these cases were not even registered,” said Zahoor Wani, senior campaigner, Access to Justice, Amnesty International India.

“People didn’t approach the court because there was lack of awareness of their legal rights, and, second, there was, and continues to be, a sense of insecurity.
“In the 1990s, the police would shoo away the victims’ families when they approached them for registering a case against the armed personnel for alleged extortion or murder,” he said.

Replying to a question posed in the Rajya Sabha, the upper house of India’s parliament, Subhash Bhamre, the deputy minister of defence, said that 50 such cases have been reported by the state government to the central government.

“A total of 50 cases have been received by the Union Government from the Government of Jammu and Kashmir for Prosecution Sanction against Armed Forces personnel under AFSPA, 1990,” Bamre said on January 1.
All these cases took place from 2001 to 2016. This suggests that the state government has not sought permission from the central government for prosecution of the accused Army men in any of the cases from the 1990s.
Only in three cases, which had taken place in 2006, 2011, and 2014 respectively, the decision is pending. In the remaining 47 cases, permission has been denied.

The defence ministry further apprised the Rajya Sabha: “The reason for denial/pendency of prosecution sanction is on account of lack of sufficient evidence to establish a prima facie case”.

Wani said even when an Army man has been found guilty in a court-martial, he can make an appeal in the Armed Forces Tribunal in New Delhi for overturning the judgement.

The victim or his family has no access to this tribunal and they cannot make a representation there.

In one fake encounter case, a military court in 2014 found an Army colonel, a captain and three other security personnel guilty of killing three Kashmiri civilians in 2010 and sentenced them for life.

But in July 2017, the sentence was suspended by the Army Tribunal. The five Army personnel had branded the slain civilians as foreign fighters for the sake of rewards.

Did the Army pick Fayaz because of his past? Nasir Qadri, a well-known lawyer in Jammu and Kashmir High Court, says the grounds of detention are often flimsy.