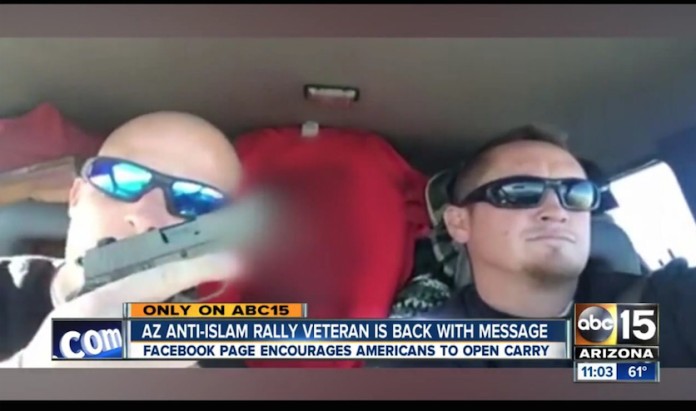 November 23, 2015 (Hancock, Islamberg NY), The Muslims of America (TMOA) and its media partner The Islamic Post are collaborating with federal, state and local police officials who have increased patrols around its American villages particularly Islamberg, NY located 45 miles southeast of Binghamton. The organization has been meeting with authorities around the clock to secure the safety of its congregation.  The Muslim congregation has demanded the immediate arrest and detention of Jon Ritzheimer of Phoenix, AZ.

Residents of H. Islamberg have been vigilant on the heels of a Facebook video rant made by Ritzheimer on November 18, 2015. “We are driving all the way to New York to see those [expletive] at the Islamic Post who called me a [expletive] terrorist.” Brandishing a pistol Ritzheimer says, “We are [expletive] ready for ‘em! Bring it on you Muslim [expletives]!  I’m urging all Americans to start carrying a slung rifle”, he yelled into the camera. Before being removed from Facebook the video had hundreds of “likes” and comments in support of the former Marine.  Ritzheimer is in violation of the FACE Act which is the federal law which protects houses of worship from those who “intentionally injure, intimidate or interfere with or attempt to injure or intimidate or interfere with any person lawfully exercising or seeking to exercise the First Amendment right of religious freedom at a place of religious worship,” 18 USC 248.

“Ritzheimer’s rhetoric and incendiary comments and conduct will cause other misinformed citizens to act with violence and hatred toward their fellow Americans. We hold him responsible for any untoward acts that may result from his videos, pictures and calls to action against Muslims,” stated Tahirah Amatul-Wadud counsel for TMOA.

Ritzheimer’s anger is a delayed response to being featured in the June 2015 issue of the Islamic Post as an American Taliban. “The moniker American Taliban is what we give to American domestic right wing extremists who personify the behavior of the Taliban like those in Peshawar Pakistan who burn schools and kill children.

Ritzheimer fits the bill by virtue of his orchestrated armed Mosque protests and inciting hate against Muslims,” said Muhammad Matthew Gardner, TMOA spokesman.  Ritzheimer stated that he and a friend were going to mosques throughout America to take pictures of themselves behaving obscenely while driving to New York. TMOA contacted the two mosques that were threatened, one in New Mexico the other in Texas. “Indeed these are difficult times for Muslims,” said a leader of one of the victimized mosques.

This week TMOA hosted a conference on Islamophobia which has been watched by thousands throughout the world. “The reason Ritzheimer is escalating his rhetoric now is to exploit the momentum from our conference and to take advantage of the increasing hostile climate of Islamophobia – to which he and other American Taliban have contributed. We have to take his rants seriously because he has expressly stated he will kill us if given the opportunity and he has many followers who join him in wanting to kill Muslims,” stated Gardner.
Hon. K. Hussein Adams
Chief Executive
The Muslims of America, Inc.

The Muslims of America, Inc. (TMOA) is an indigenous American Muslim organization founded in 1980 and based in the United States of America. TMOA is dedicated to maintaining Islamic principles to be practiced in both letter and spirit by forming communities focused on love for the Almighty Creator and His Commandments, along with the establishment of long-lasting relationships with our Christian brethren through our interfaith programs. Follow us on Twittter/Facebook/ Tumblr /Pinterest #JusticeForIslamberg.